Yes, anyone can say that turtles are smart. They are smart, intelligent, and sharp. Past researches had found out that turtles possess unique instinctual intelligence, which highly plays a role in their ability to even survive in the wild and hunt for food. They are also being vigilant against hunters. Turtles can save their past experiences in their minds and then learn from those past experiences. This is mostly referred to as their learned intelligence. 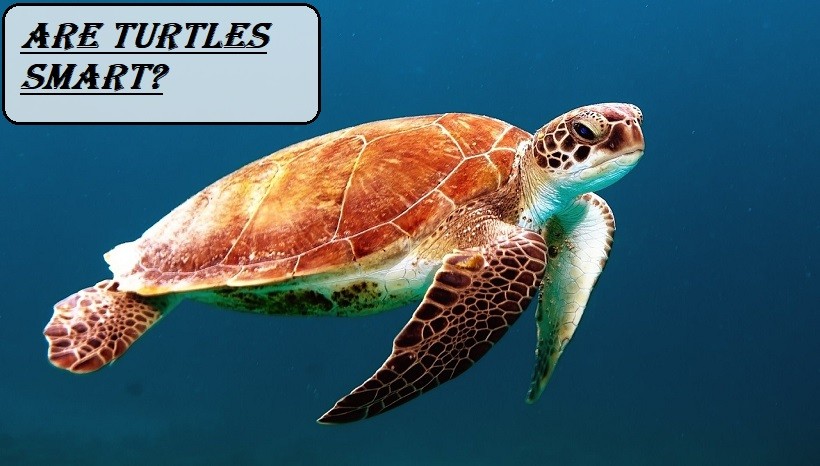 Although, it may seem strange to define the intelligence of a turtle or how smart the turtle is. You can’t measure the IQ of a turtle, but by conducting different experiments, by creating different scenarios, you can study what a turtle can do in different conditions. And how a turtle figures out any problem and finds out the possible solution to it.

How Smart Are Turtles?

How Smart Are Red-Eared Slider Turtles?

There might be a chance that on the first couple or thrice of occasions, they don’t acknowledge but once they get to know their name, they will surely respond. It is interesting to note that red-eared slider turtles know what’s the time of their meal, and hence go to their feeding area.

How Smart Are Box Turtles?

Box turtles know their path well. They remember the spots where they have been in the past. Even if they are going through forests, valleys, or even dangerous roads, they know their way back. That’s why researchers have called them one of the smartest species. But, this is also true that they don’t belong to any place.

Even if they are petted, box turtles know their owner’s face and voice very well. Box turtles possess an ability to remember all the stuff which revolves around their life, like their habitats, feeding area, etc.

How Smart Are Painted Turtles?

Painted turtles possess a good sense of smell and very excellent eyesight. This is enough to recognize any person who is either strange or anyone who feeds them. It is called that red-eared slider turtles and painted turtles are cousins to each other and hence they are somewhat similar in some ways.

In the category of petted turtles, painted turtles are mostly favored. These turtles are among the turtles, which are likely to be petted more than other turtles. It is due to the fact that they are smart enough to know how to survive, especially in harsh and difficult conditions.

Do Turtles Have A Good Memory?

Yes, turtles hold a very good memory. If you can’t call turtles as smart as other animals, then you can’t call them stupid as well. Turtles understand fascinating things very well. They have a very strong memory in remembering the things or persons which benefit them in any way.

For example, a petted turtle can easily recognize their owners who feed them or plays with them. Apart from this, if any stranger approaches a turtle or any other animal from which he feels danger, then the turtle hides themselves inside their shell for personal protection and safety.

Below are some of the interesting facts regarding the brain of a turtle:

Can A Pet Turtle Understand Its Owner’s Language?

Well, unfortunately, no, a turtle can’t understand its owner’s language. But pet turtles can distinguish between different sounds which their owner produces. Turtles recognize those voices in their manner and then accordingly respond to them.

Why Do Turtles Hide In Their Shells?

All turtles have shells and these shells are called carapaces. These carapaces are structurally hard. A couple of species of turtles possess shells that are quite smooth or rugged. The shell plays a defensive role for turtles. Without these, turtles will be defenseless and they can be easily harmed as they have really sensitive bodies.

A few turtles including land turtles such as a tortoise can withdraw their four legs and their heads and stow away inside their shells. Various types of turtles are unable to do this. Some bend upside down and other turtles bend them into S position. A few turtles can’t withdraw inside the shell completely, however they have the option to overlap their legs and heads to feel more assured. Regardless of how they defend themselves, turtles use the shells to cover themselves when they sense danger. Turtles also go into their shell when they want some relaxation.

Some oceanic turtles can’t switch far into their shells. They are bound to jump or swim profoundly submerged, when they think that some threat is nearby. Although, few turtle species can withdraw completely or others have harder skin on the legs that assist with securing them. Tortoises and a few turtles have thick hooks that are sharp and can support them in guarding themselves.

Ocean turtles additionally will in common have an additional shell, a flatter one that is smooth out for swimming. Their shells are typically not vault formed like a land turtle, and they can’t utilize their shells alone for successful assurance.

Are Turtles Safe In Their Shells?

Even though turtles are genuinely protected inside their shells, they can’t withdraw their body parts like their heads and legs completely. Indeed, even turtles that can withdraw and close the shell are not resistant. The shell of the turtle is made of a hard substance like a bone, and bones are exceptionally hard. It’s difficult to break them, even then they can be broken, wounded, or cracked.

Turtles have very good eyesight. Ocean turtles can certainly adjust their sight from water to land, empowering them to discover food for both themselves and their child. Strangely, these turtles can find anything in color. This special ability assists them with staying away from being a food to predators, and recognize what food sources they will eat. The turtle’s sight is so well created, he can recognize different patterns and different shape contrasts.

Turtles smell great both offshore and under the water. Although they lack nostrils, they have bumps under their jawlines. These bumps are referred to as barbells that have nerves that permit them to find trails. Land turtles, this very much created sense keeps away from hunters.

Turtles cannot hear well since they come up short on the eardrum that different species have. Still, their hearing ability is good enough to listen to lower sound frequencies and lower sound vibrations. This stands equal for both under the water and above the surface of the water situations.

Although turtles possess rugged skin, it is still very subtle. Ocean turtles can sense even if anything slightly touches their body or even their shell. This is due to a unique development of nerves under their shell’s surface which ultimately gets in their knowledge when anything even slightly contacts their shells.

In a nutshell, no one can mark the IQ score of a turtle, but researchers have found some ways to predict the intelligence of a turtle. These are some practical measuring scales that test the turtle’s intelligence. These particular tests give an estimate of the turtle’s ability to solve scenarios, ability to think, reasoning, and communicating skills. In a nutshell, it divines the problem-solving strategies of a turtle.

The measure of how smart and intelligent a turtle is depending on its brain. The crux of the discussion can be that diving deeper into a turtle’s brain can be the way to get an exact estimate of the turtle’s intelligence.