If you have landed here, you would probably be wondering about the question of whether to feed parsnips to your guinea pig or not? Well, don’t worry, we have a detailed answer to your question. 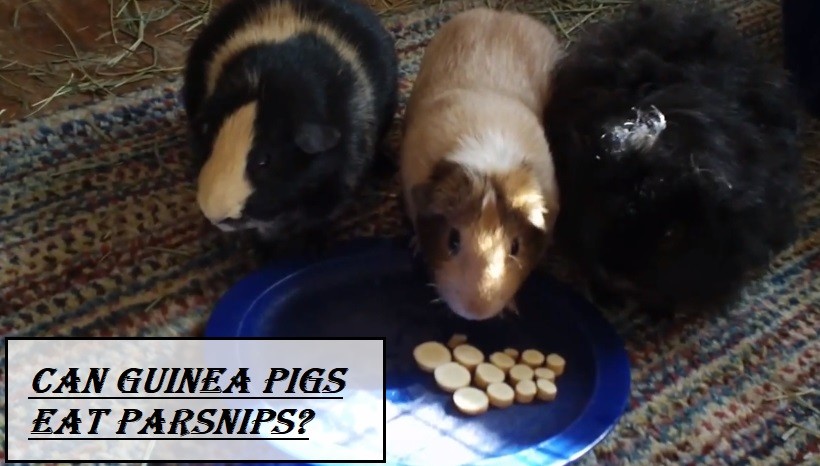 Guinea pigs are very fragile animals. It’s common for their owners to worry about their diet as they can’t eat and digest everything. If you also own a little rodent, then you need to be extra vigilant about what to serve them.

Parsnips are edible for guinea pigs. It is common nourishment for them. Due to the presence of many fundamental nutrients, it provides multiple benefits to them. However, the quantity should be kept in control as it also contains a considerable amount of oxalates. Excessive intake of it is lethal.

Vitamins and mineral content in this vegetable make it necessary for you to feed parsnips to piggies. Vitamins are important for healing wounds. Similarly, minerals like potassium are involved in the regulation of nerve signals along with many other functions too. If you supply this veggie to your pet in a moderate amount then it is good enough. Otherwise, be ready for the aftermath.

Benefits Of Parsnips For Guinea Pigs

There are several benefits of eating parsnips for guinea pigs. Some of them are:

Masters of cavies should provide them vitamin C in their diet. Because just like humans, these piggies can’t fulfill their need for vitamin C by themselves. Vitamin C is crucial for them. It helps them to avoid fatal diseases like ‘scurvy’.

Vitamin C is also necessary because it helps in healing wounds. Safeguarding the tissues of the body is also a function of vitamin C. It assists the immune system to boost. Collagen formation and the making of neurotransmitters are included in the roles of vitamin C.

As parsnips contain many fundamental nutrients like copper, potassium, vitamin K, and iron. Parsnips are not high in fat components. It helps guinea pigs in having a healthy heart.

Copper is responsible for enhancing the production of red blood cells. That’s why copper prevents diseases like anemia.

Vitamin K is required for blood clotting because it assists the body of guinea pigs to manufacture a protein called prothrombin. This protein is important in preventing blood clotting.

Magnesium is involved in shaping the muscles of guinea pigs. It helps cavies to avoid muscle throbbing. Magnesium also tends to lessen the risk of diabetes. It is also a stress or anxiety reliever as well.

As parsnips have a decent amount of calcium thus it is a good choice, especially for young cavies. It provides great assistance in bone development.

Due to the presence of carbs and proteins, parsnips also prove to be an excellent source of energy for guinea pigs.

There are certain risks associated with eating this vegetable. Although, they can be easily avoided. Still, let’s have a look at them:

Urinary problems can arise from the excess consumption of calcium, such as kidney stones or bladder stones. Parsnips also contain calcium content. If it is fed to guinea pigs in abundance, it can cause health problems for them.

Parsnips are not free of sugar. A little amount of sugar is okay for guinea pigs. But excess of it is dangerous for them. Sugar is neither healthy for humans nor piggies. Great consumption of it can cause diabetes. Also, it can lead to weight gain.

Although the minerals, present in parsnips, are good for guinea pigs. But, if they are taken in abundance can cause disturbance to the digestive system of your pet. Stomach ache is a common problem that happens due to the over intake of such minerals.

It is not very common for guinea pigs to become allergic to parsnips. But it is possible. You should notice if your pet is showing any abnormal behavior when you introduce it to this veggie. Common symptoms are itching, mouth swelling, and swelling around lips and tongue.

If the little rodent is showing any such signs, stop giving it parsnips immediately.

How Many Parsnips Can Be Given To Guinea Pigs?

You need to keep an eye on the frequency at which your pet is getting parsnips. To avoid any digestive problems, don’t give it to them more than twice a week.

Some pieces of parsnip are enough for your piggie to eat at one time. A better way is to mix the veggie with some other tasty and healthy food like broccoli.

Cooked parsnips are a big no for your guinea pig. They are in no way healthy for them. Guinea pigs’ stomachs are very fragile organs. A little disturbance can even upset it very much. Any type of cooked vegetables is harmful to their health because their stomach cannot tackle it. So, your guinea pig can eat parsnips but only the raw ones. Cooked parsnips are prohibited for them.

This is still an ongoing debate. Some experts say parsnip leaves are safe and healthy for guinea pigs. Whereas, some say that they should not be given to them. They are toxic to both humans and animals. But the most recommended suggestion is to avoid giving it to your pet.

There are more risks than benefits if they are edible. Your pig might suffer from an allergic reaction. Therefore, only stick to the vegetable.

Guinea pigs are allowed to eat parsnip skin. It is nutritious and tasty as well. It has a sufficient quantity of vitamin C and calcium. However, washing it before anything is an obligation as it may contain some harmful chemicals that are eliminated after washing.

Parsnip skin is also permitted only in moderation, just like the vegetable itself. If it is taken in excess then the risks of many health issues arise. Kidney stones are a common hazard of overeating parsnip skin as it has a lot of calcium.

What About Raw Parsnips?

Raw parsnips are best to give to your guinea pigs. Always give your pet raw parsnips to eat. Avoid giving it cooked ones. Raw parsnips have maximum health benefits for cavies. They have all the essential nutrients which are missing in cooked parsnips.

Most guinea pigs don’t have a favorable attitude towards parsnips. It is because of its taste. Some piggies however like to eat this veggie as everyone has unique preferences.

If your pet doesn’t like to eat parsnip, try mixing it with other tasty vegetables. It would alter their taste. If it is still showing reluctance in eating, you should always try some other vegetable.

Alternatives Of Parsnips For Guinea Pigs

Guinea pigs can eat parsnips. But there is no certainty that they would like to eat them, or they do not get allergic. If that happens you just need to find an alternative.

Below is a list of some alternatives of parsnips for guinea pigs:

Parsnips are safe and healthy for guinea pigs. But only a moderate quantity is appropriate. It has a lot of nutritional value. Due to the presence of carbs and sugar, pigs are not allowed to eat it more than two times a week. Many health benefits like maintaining the cardiac health of guinea pigs are also provided by parsnips. Excess intake of it is linked to becoming diabetic. Cooked parsnips are not suitable for little rodents. Parsnip leaves are also not advisable. Parsnip skin however is good for them.