Croad Langshan is an old, calm, and huge Asiatic chicken breed introduced from China. They are large in size although polished and curios. These birds are further bred to develop Australian Langshans, Orpingtons, and Australorps, etc. There is a wide diversity of Langshans found throughout the world. 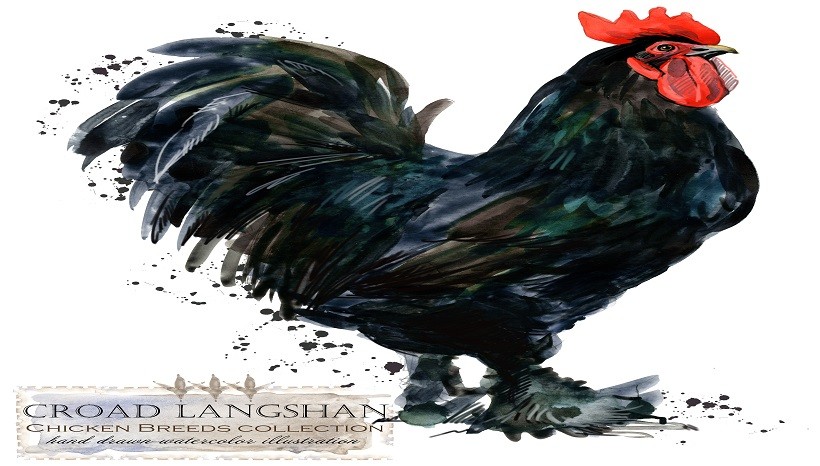 Croad Langshan fowls are fairly large in size and because of that they are well known for their meat production. Their weight typically ranges from about 3.5 to 5 kg (10lbs) for an adult male and 2.5 to 3.5 kg (7.5lbs) for a female. They possess elongated feathered feet.

The original Langshan breed exists in black and white color only. But blue croad langshans and splash croad langshans are also found. Black Croad Langshan shows a spectacular blend of dark blue and green. Their skin is white in color and their legs are slate grey with pink feet. They possess silky feathers that are black in color with a greenish-blue shade. In the daytime, they seem like dark blue instead of black. Their eyes are dark brown and comb, earlobes and their fold of skin hanging from the neck or throat are bright red in colors.

Croad Langshan chickens are pretty considerable egg layers. They lay about 150 to 200 large-sized eggs per annum. It lay eggs mostly in winters as they are cool and heat-hardened birds. They have capably recognized for their egg production as well as the meat because they are a dual-purpose breed.

These birds lay large eggs of dark brown or plumped color having a purplish shade of color on them. Sometimes pinkish brown. Most of the eggs also show a dark spot. Their eggs look elegant and rare because of this pigmentation of colors. That’s why they are considered good-quality birds.

This is a chicken breed that is exceptionally tall in height. Female Langshans are a minimum small in height as compared to males.

They are friendly and calm temperament birds that are easy to tame. They are quite adaptable and easy-going in nature. However, the females become aggressive sometimes at the time of the early incubation period.

Langshan is quite easy to care for. Put them in a fence that keeps them moderately hot, moistureless, and protected. Give 4 square feet of space for each chicken and 10 to 12 inches for a Langshan rooster must. Supply the baby chicks with a reliable quality chick starter feed or grower during the initial 14 to 16 weeks to make them strong. When they become young birds and start to enter the age of consent(adulthood), replace them with the best quality laying feeds to make their bodies healthy for good egg production.

Must provide your egg-laying hens with an adequate amount of calcium supplements in the form of oyster eggshells or crushed eggshells. Keep a close eye on them throughout and check the flock on a regular basis to suspect any kind of disease in them like a runny nose, loss of appetite or shortage of breath, etc.

Croad Langshan is an extended well-established breed around the complete world. Always prefer chickens from the precise breeding line to get beneficial results. Major Croad imports the first Langshan from China to Britain in 1870 and remains well known till the second world war. At the present time, it includes the index of endangered breeds. Only a few well-established breeders of Croad Langshan chickens remain in Britain and it is under threat throughout the entire world.

Langshan roosters are tall, heightened, large breasts males. These birds are easy to tame and adjust well to both imprisonment and freedom. A Langshan rooster always leads his flock. One rooster can take over various small flocks at a time. The adult rooster weighs approximately 10 pounds.

Croad Langshan hens are great egg layers and also excellent sitters. Because of their large size, it’s easy for them to cover a dozen of large dark brown eggs at a time. These females are known to be the best intensive mothers. The adult hen weighs approximately 7 pounds.

Blue Langshans are luxurious, bluish slate grey chicken breeds, obtained by the crossbreed of Croad Langshan males with Blue Andalusian hens. These are strong productive birds laying numerous white eggs. They have been identified by the American Poultry Association. P-Kennedy introduced the first Blue Langshan in 1935 at a Bankstown show. According to him, Blue Langshan should be thought out as a Chinese Langshan or Austrashan. Blue Croad Langshan roosters are also known as Black Leghorns because of their feathers.

White Langshan is an original breed that originates from China, created by crossbreeding Black Langshans with Wyandottes. These Langshans exhibit recessive white gene ‘c’ that changes the structure and colors of adult bird’s feathers. Despite any additional mutations of the genotype of white sorts of  Sussex, Orpingtons, Wyandottes, Pakins, Cochins, Minocrans, etc.

Croad Langshan breeders are found all around the world who sell their breeds and hatching eggs. They are gentle birds and comfortable to keep with families. This breed of chicken is at risk of endangerment so today mostly breeders are found in Britain. Currently, at Spectrum Poultry farm blue and black Langshans are in stock. Here Langshan chicks are available for $25.00. Their stock is also available at Sunset Barn family farm where per egg costs $3.50.

Langshans are large birds famous for both their meat and egg production. They are rich in white meat. Their eggs are large in size with stunning colors and lay a minimum of 180 eggs per year. They are cooled temperament, species simplest to tame. They cannot fly high because of their large size and heavy weight. This are available in three color varieties black, blue and white. The male is called a Langshan Rooster and the female is known as a Croad Langshan hen. They are at risk of becoming endangered species soon.

1. How high can a Croad Langshan rooster fly?

They cannot fly much high as their large weight can slow down the flight. But must maintain their fence walls high for protecting them from the wild animals as sometimes they can fly out.

2. Why was the breed Croad Langshan created?

Langshan birds originated in 1904 when the Langshan club was established to keep up the initial imprints of the bird.

3. What color do you get mixing black and blue Langshan?

When we crossbreed a blue Blue male Langshan with a black Langshan hen, we get dark blue, black, or just blue chicks with the order reversed.