Yes, turtles do have ears. They respond to loud noises because of their internal ears. External ears are missing in the turtle that’s why we can say they have no ears. Due to the absence of external ears, they are not considered a good listener. 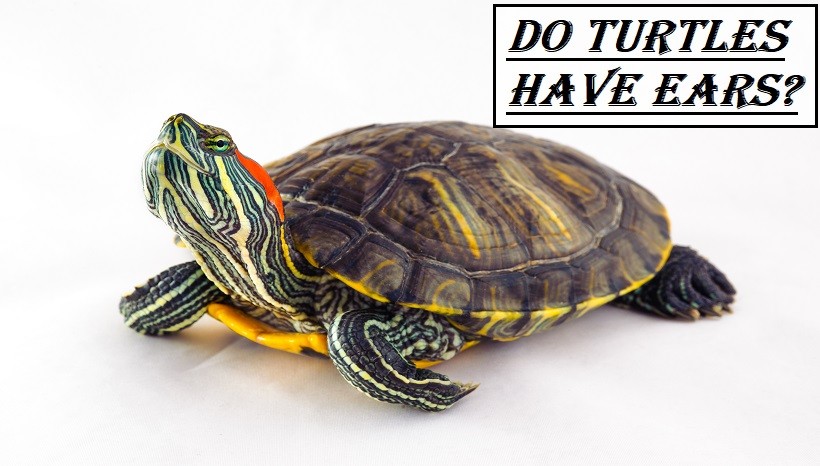 Turtle inner ears receive low-frequency sounds and respond to them. We cannot consider them as deaf animals. To have a clear understanding of how turtles hear, we need to study the working of the internal ear.

Turtle’s inner ear can be divided into two distinct parts i.e., the inner ear and the middle one. In the place of external ears, they have tiny flaps of skin. These flaps of skin manage to capture the sounds from the environment and pass them on to the middle ear.

The only purpose of having a middle ear is to pass the sound to the inner ear. When the sound waves enter overhearing the ear, it processes the sound. After that, the signals are transmitted to the brain, where the brain creates a message. The brain releases the signal to the body, a turtle reacts to the sounds.

Turtles lack good hearing because of missing external ears. They can just respond to a few distinct sounds. The flap of skin is unable to absorb a wide range of noises and sound waves.

On the same note, you cannot say that they are bad listeners. When a predator animal is going to attack his prey, it makes certain sounds. Turtles can capture these sounds made by the predator when they are aiming to prey on them. This specific range of low-frequency voices is enough to use for their survival.

High-frequency sounds generate a lot of vibrations, so they are more powerful for the turtle to hear. Therefore they are not good at receiving high-pitched sounds. Habitually, turtles spend more time in the water than on the land. Hence, their hearing becomes good while being in the water.

Can turtles distinguish vibrations and sounds?

A turtle can recognize vibrations and sounds. In the inner ear of a turtle, there is no eardrum. The middle ear of a turtle has small bones that direct the signals towards the ear canal. These small bones assist a turtle to make out a clear difference between a sound wave and a vibration.

Yes, turtles can hear on the land as well as in the water. They protect themselves using low-frequency sound waves. The absence of external ears does not allow them to handle high-frequency voices. The hearing range of a turtle is somewhere between 200 Hz to 750 Hz.

Research shows that their ears are weak to accept sound waves of more than 1000 Hz frequency. At the same time, green sea turtles can hear 200 Hz to 500 Hz frequency sounds. They are more sensitive to sound waves related to other turtles.

Turtles can hear music that is low in frequency. Instruments that can give high pitch music sounds cannot be incorporated by the turtles. Even they are unable to listen to the music playing on the violin. Coming to the music, they can absorb low pitch sounds or bass like a cello. Music is not a source of enjoyment for turtles. It is just a change of air pressure for them.

Turtle Hearing In The Water

Turtle hearing underwater has an advantage in listening on land. Water is a difficult medium if compared to the air. Contrarily, there is a key difference in composition also. Particles that constitute air are not close to each other, while in the case of water they are tightly packed together. This composition makes sounds better for hearing underwater. The sounds become louder and clearer for hearing. Turtles live in water for most of their lives, so the presence of external ears could prove to be problematic for them.

Does A Tortoise Have Ears?

Tortoises do have ears and they are hidden under the flappy skin, above the jaw, and behind the eyes. They have an inner ear at the back of the head. Tortoises respond to low frequencies when there is a need to fight, mate, or while hatching eggs.

Indeed, the red-eared sliders can hear and respond to sound waves. Their hearing ability is not top-notch, but they are overly sensitive to vibrations. They can pick up vibrations from the ground or environment, send them to the inner ear and the brain, and act accordingly.

Box turtles can hear the voices but in a limited frequency range. They have a thin layer of skin called the tympanic membrane. It is located behind their eyes on both sides. The tympanic membrane covers and secures the middle ear as well as the inner ear. Box turtles can hear sounds having a frequency between 50 hertz to 1500 hertz. They usually use their ears to maintain a  balance.

Do Turtles Rely On Hearing Sense?

Turtles do not only rely on hearing sense. They use smell and vision the most while predicting situations in the environment. They can see you coming by using vision and can sense footsteps sound as well. When it comes to food, they can smell what is coming or preparing.

Can Turtles Develop An Ear Infection?

An aural abscess occurs when a turtle has a deficient immune system. Another reason behind the infection is the deficiency of vitamin A in the turtle’s body.

Turtles have middle and internal ears but external ears are absent in them. They can hear low-frequency sounds rather than sharp sounds. The frequency range for turtles is 200 Hz to 750 Hz. Turtles use their ears just to protect themselves from predators. An ear infection is common between turtles, so feeding supplements with the food is necessary if they are Vitamin A deficient.