Turtles are ancient creatures that have survived millions of years. This fact complicates many people. Do turtles have teeth? How do they protect themselves? and How do they catch their prey? How did they survive thousands of years? 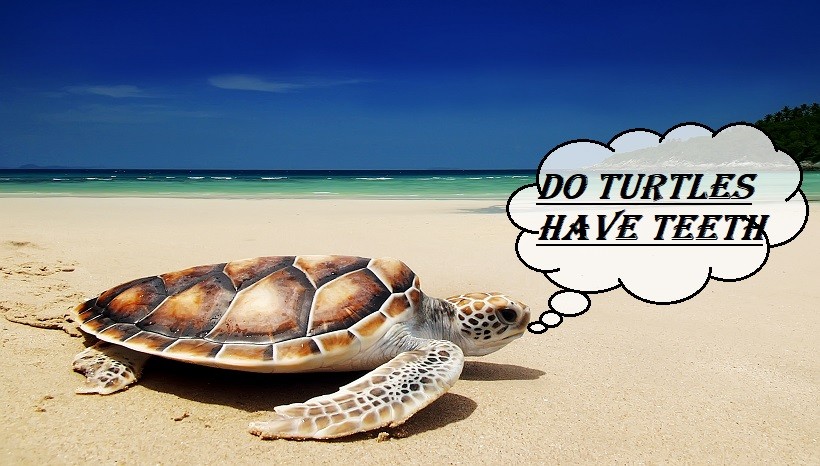 Well, the answer to these questions is that turtles have teeth is probably impossible. Even tortoises and terrapins also lack teeth.

They appear to have lost their teeth 150 to 200 million years ago. However, they have strong jaws and beaks which help them to catch their prey and protect themselves.

Turtles are cold-blooded, egg-laying reptiles. Their earliest members date back to Middle Jurassic time even before crocodiles and snakes.

How many teeth does a turtle have?

Turtles lack teeth. Instead of teeth, they have rigid structures in their jaws that help them in biting their food. Researchers have found signs of tortoise teeth in remaining fossil fuels.

These fossils are called Odontochelys or tooth turtles that originated about 200 million years before. These creatures possess teeth in both upper and lower jaws revealed by their fossils.

Young turtle juveniles are born with a single tooth named a caruncle or an egg tooth. This only tooth is present in the front of the upper jaw and might fall off after a few months of their hatching.

That egg tooth assists the young one coming out of their egg by breaking the eggshell. It is not known to be a real tooth and never remains forever.

Do sea turtles have teeth?

Sea turtles are air-breathing reptiles having no teeth. They exhibit bird-like broad beaks for smashing and tearing seagrass.

Their bites are too painful because of their sharp beak with powerful jaws and a big mouth. Most of the time sea turtle’s bite is so intense that it breaks human bones and cause skin injury.

Do Snapping Turtles have teeth?

Snapping turtles are native to freshwater and have strong jaws with a flat bony beak with no teeth. Their beak is so sharp that they can catch and cut the prey with it.

Snapping turtles bite painfully. They are harmless until and unless they are intrigued. But in rare conditions, they become curious and bump their beaks on the legs of a person standing in water.

Exhibiting a bony beak instead of teeth makes a turtle unable to hide his head under the shell for protection.

How do turtles eat?

Turtles have rigid beak-like mouths with strong jaws and ridges, which help break their prey’s shell. Turtles having soft lips just swallow the food besides grinding or have modifications based upon whether they are carnivore herbivores or an omnivore.

They have a relatively short beak and less serrated ridges. Omnivorous turtles have mixed adaptations with pointed beaks but not as much as carnivorous turtles. Turtles use their tongue muscles for swallowing and other tearing purposes.

Turtles are docile ancient creatures that have survived millions of years. They are the only reptiles that do not have teeth.

However, they have a caruncle which is a temporary modification that usually falls off. They have strong beak-like mouths and serrated ridges which perform the function of teeth along with strong jaws which help them to crack the shells of prey.

But they have adaptations depending on whether they can be herbivores like river terrapins or carnivorous like musk turtles or they may be omnivores like map turtles.