Golden Lion Tamarin is also known as Golden Marmoset belongs to the family of New World Monkey. The scientific name of this monkey is L.Rosalia, with the genus Leontopithecus and family Callitrichidae. The monkey is named golden lion due to the long hair around the face and bright reddish-orange pelage. However, the monkey’s face is hairless and dark. Furthermore, the monkey has a limited distribution range, and 2-5% of their original habitat in Brazil. Moreover, the monkeys stay active for 12 hours a day. 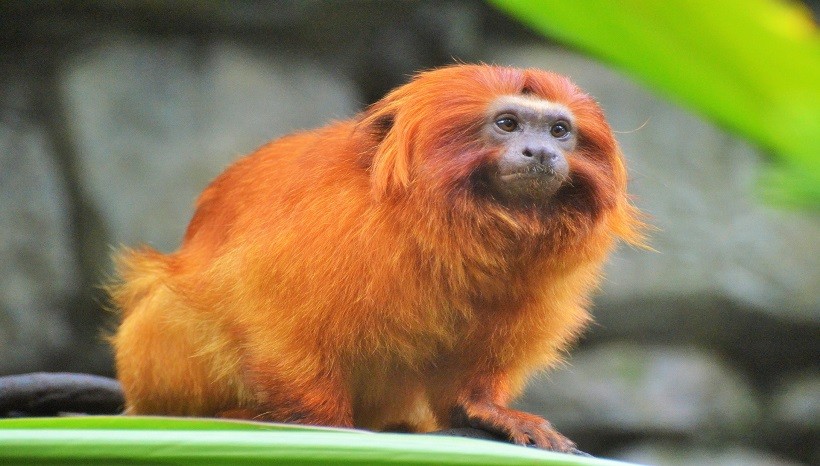 The monkey contains mane that covers the ears with bare face and little hands as well as feet. Moreover, it has long, canine teeth and short incisors. Golden Lion Tamarin Monkey has a bridge reddish orange pelage, but the orange fur does not contain carotenoids. It moves by using their four limbs, and the locomotion is similar to the squirrels.

They live in social groups where males raise the offspring and carry their babies on the back. However, they often produce twins. The monkey is arboreal and spends most of their time on trees. They go to hollows to sleep at night and search for food in the day time. Moreover, due to the long fingers, they can snare insects, fruits, and other food items.

The monkeys live in nuclear or extended families. However, they are highly social and make good bonds with other groups. Furthermore, the monkey defends their territory through scent markings and by generating vocalized threats. Moreover, if anyone tries to enter their area, it can get aggressive. Their aggressive behavior includes the opening of the mouth, staring with the arched back. Moreover, they groom each other and share food as well.

This Monkey Habitat includes the Southeastern Brazil’s Atlantic coastal regions. You can find them in the humid forests. They settled in the closed canopy, which is 29-100 feet above from the ground. However, the monkey has a habit of sleeping in holes.

The female monkey mostly gives birth to twins after a pregnancy of 5 months. The Golden Lion Tamarin Baby born with the eyes open and fur on the body. Everyone in the group takes care of the baby and carries them. However, the mother only does the nursing care of the baby. Furthermore, the baby weaned at the age of three months.

It is one of the world’s most endangered animals. It is due to the hunting of golden lion tamarin by poaches and the destruction of their habitat to generate the agricultural plantations. However, only 2-3% of monkeys exist in the rainforest habitat.

These monkeys are active, friendly, and social as well. You can keep them as a pet, but don’t ever mistake to take them lightly. They require good care, daily commitment, attention, and dedication more than the other pets. Moreover, you can get them from any pet shop nearby or online. The cost of this monkey is $1500-$2500.

Due to the loss of their habitat, small groups of golden lion tamarins are left in the world and considered endangered.

2. How many golden lion tamarins are left in the world?

There are 1000 golden lion tamarins monkeys left in the world and 845 remaining in the zoos.

3. Do golden lion tamarins live in the amazon rainforests?

They lived in the Amazon rainforests, but humans destroyed their habitat through illegal logging and urbanization.

4. Where does a golden lion tamarin live?

The monkey lives in the Atlantic coastal regions in southeastern Brazil.

It is also known as a golden marmoset and one of the endangered species due to habitat loss. They have a habit of living in groups where they share everything and groom each other. Furthermore, the male monkey takes care of their babies, and females take care of their nursing. Additionally, they spend their night in holes and have the smallest body.