The golden thread Turtle Is A beautiful small-sized aquatic turtle species of Eastern Asia. They are native to the islands of Hainan and Taiwan and found in large water reservoirs from lakes to ponds, rivers, and streams of Southern and Eastern China. 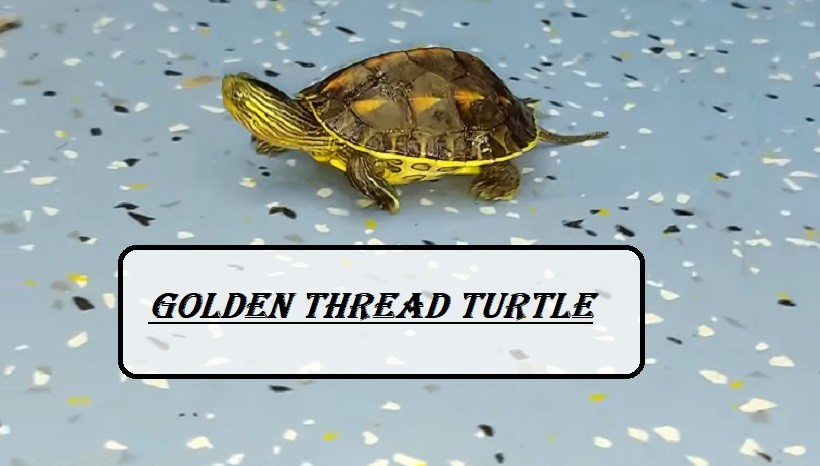 They possess long tails along with horizontal stripes. These turtles are facing a high risk of extinction in the wild in the next coming years.

Golden thread turtles or Chinese Striped-Neck Turtles are average size turtles. Females are larger than male turtles at an adult age. Female turtles can grow to an average size of 7 to 12 inches and males about 5 to 8 inches at full maturity.

New-born baby turtles are about an inch at the time of hatching from eggs. Their shell size lies between 1.5 to 2 inches. Baby golden thread turtles are less herbivorous than adults.

Their diet depends on various foods such as worms, insects, dried fish and shrimps, turtle or fish pellets, and certain aquatic plants, etc. Young juveniles are of greenish-grey shade and a bit different from adult turtles in appearance.

Golden thread turtles usually have great lifespans similar to other turtle species. Like size, females also have longer life expectancy than male turtles. Their actual lifespan reaches about 40 years and sometimes above 60 years in captivity.

Golden thread turtle care sheet is engaged to cover up all related care facts of this species. Adult females of large size require 100 gallons to survive and along with a male they need approximately 150 gallons of space.

Golden thread tail turtles are omnivores as well as herbivores. They are easy to feed as they lack an insatiable appetite so rely on an expert commercial palette diet to feed your turtle. Be careful! And avoid overfeeding the tortoise.

Keep upgrading the basking area of your thread turtle according to their growing size. The temperature of a turtle’s basking area should be maintained at 85-90°F.

Best quality water filters are recommended for their tank to keep the water thoroughly clean as your turtle health can’t be compromised. Try to limit turtle handling only at the time of need.

Chinese golden thread turtles have unique patterns of bright yellow stripes in combination with black or brown (dark) stripes. These stripes cover the limbs, neck, and face of their carapace.

Golden thread tail turtles have a long tail with horizontal dark lines that continues till the tip of the tail. Young long-tail hatchling’s shells and body are of grey color and this color modifies into black or reddish-brown when they grow adult.

Chinese golden thread turtle for sale is available online with a fully fledged guarantee. They vary in prices according to the breeder’s demand and quality. Their approximate reasonable prices are about $44.00 to $64.00.

Golden thread turtles are good pets of average size. They are mostly found in large freshwater habitats of China and adapted to a broad range of climatic conditions.

Chinese golden thread turtles are simple and easy to care for and feed. They are declared as endangered species on the Threatened species red list of the World Conservation Union.

1. How big do golden thread turtles get?

Golden thread tortoise can tolerate a great range of temperatures. The female turtles vary in size from males. Adult female turtles are from about 8-12 inches and males are comparatively small reaching about a maximum of 5-8 inches.