In 1984 at the convention of the American rabbit breeders association (ARBA), Bonney Seeley first introduced the jersey wooly rabbits. The Netherland Dwarf and the French Angora were crossed to create the jersey wooly rabbits. A little rabbit with a woolly coat resulted from this cross. The resulting New Jersey Woolies retained the oblong body shape of the French Angora but were smaller due to the dwarfing gene’s effect. 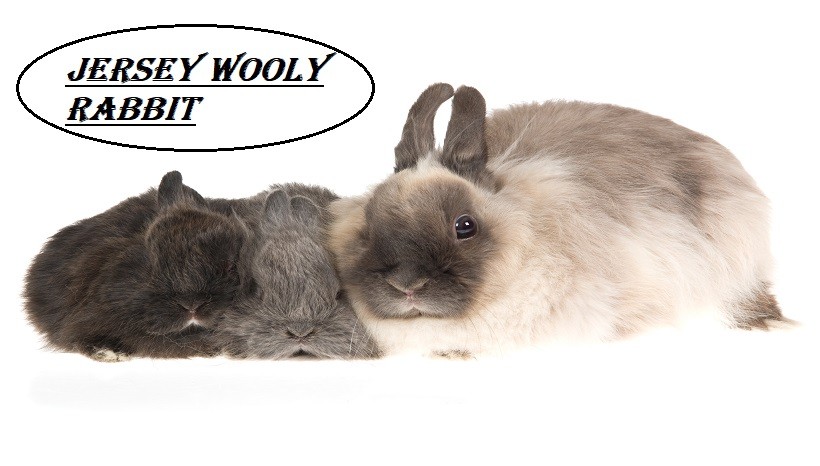 The Jersey Wooly is currently one of the most frequently displayed rabbits at regional and national broadcasts in the USA. They are also famous as docile pets. Their friendly nature and gentle behavior are noteworthy.

Due to their square-shaped head, they are famously known as Mug head bunnies. The body size of this rabbit is very compact and the ideal weight is from 1 to 3 pounds, size is very small known as dwarfs with small-sized ears that are erect and are 3 inches in length.

In non-shedding periods, holders can comb their Jersey Wooly’s fur one time a week to keep it clean and free of tangles. When the spring comes, older rabbits should be brushed a little more because this period is the season of shedding for these rabbits. There is no need to clip and trim their fur for maintaining it, damp cloth can be used to clean the fur instead of giving them a full bath.

A Jersey Wooly’s average lifetime is determined by a variety of factors, like genetics and treatment. When proper care is given, a Jersey Wooly will live for 7-10 years or even more.

A common belief is that those wooly’s who give birth to litters die in the early years, although it’s not proved or backed scientifically.

Many rabbit breeders have healthy Jersey Wooly’s who have had several litters and live for maximum lifetime like Jersey Wooly pets who never had babies. Some years can be added to their lifetime by spaying and neutering regularly.

They are categorized into six groups based on their color: Agouti group includes chinchilla, opal, squirrels, and chestnut colors. The broken category includes white-colored rabbits and the self-group includes white rabbits with blue and red eyes, chocolate, iliac, black, and blue-colored woolly’s. They also come in shades such as black and blue otter and blue and black silver marten.

Very famous as “No kick bunnies” as the name implies they do not kick or bite their owners, they have a very even temperament and never get aggressive. They are super friendly, polite, and sweet and are Rank as favorite pet bunnies.

The owner can take them into their lap and snuggle around or they can go outdoors and explore things. They are super affectionate and sweet to young children or any age group. They love to spend a lot of time with their handlers playing around with them due to their playful and joyful nature.

It’s an indoor rabbit because of its small size. The box has to be large enough to enable the woolly Jersey bunny to stretch its body comfortably. The box should be constructed with wires and a plastic floor should be covered with some sort of soft bedding.

The bedding has to be cleaned daily to remove waste and should be replaced with a new one every week for better health. When they interact with their handler outdoors or in a fenced yard their personality flourish a lot. But the owner should be aware of any predators outside because they can eat the bunny of such a small body.

For optimal health of your bunny, deworm it two times a year. Deworming paste of about a pea-size would be enough and protect it from worms for six months. The owner should also regularly check for any teeth that are ingrown and cause pain.

Because of their long wool, they have a risk of wool investment when they lick their fur for cleaning pets. If wool is invested in their stomach they can die as a result because they will have a feeling of a fuller stomach, lost appetite, very little movement, and starve to death. In case the owner notices any of these changes he should immediately contact a vet.

About seventy percent of wooly rabbits diet consists of hay of good quality such as Timothy like all the other rabbits out there. And the remaining thirty percent should include a lot of fresh vegetables, leafy greens, and fruits. Seeds of apple and pear are very dangerous for this wooly so before selecting fruits and vegetables some research must be done.

They are very small in size, there second name is dwarf jersey wooly rabbits.

The average cost of buying a wooly jersey bunny is around $50 but a rabbit of show-level quality can have a much higher price up to $100 to $150.

Wooly rabbit is the most favorite pet nowadays and is the result of a breed of two different bunnies so it should be bought from certified breeders and owners with ARBA.

Similarly, they can be bought from the world-famous director of rabbit breeders such as Rabbit breeders,  United States. On this page search for different breeders can be done according to states in the US. National jersey wooly rabbit club is another well reputed breeder.

Jersey Wooly is such a beautiful and economical rabbit, If you want to take is as a pet. Its luxurious fur and square head make it very adorable and attractive to children.

Famous pets, friendly nature, and normal price range makes this bunny a perfect choice. The wooly is a household rabbit with an audacious head and lightweight wool fur on its body, weighing approximately 3 pounds.

1. How much does a Jersey Wooly Rabbit worth?

The price depends on a lot of factors such as age, health, supply, and demand as well as the area you are living in. The average worth is $45-$50 for pet quality and much higher for show purposes quality breed. Similarly, Jersey Wooly Rabbit is very expensive in the middle east due to the low supply in those areas.

2. How to take care of a Jersey Wooly Rabbit?

It has long fur so two times a week brush can be done. Twice a year deworming medicine will be good. They should be taken outdoors for some time, good quality hay, fruits and vegetables should be given and a good cage with soft bedding.