The red-cheeked turtle is a small beautiful semi-aquatic turtle. They are a breed of small aquatic turtles known generally as mud turtles. They are found in Nicaragua near Honduras lakes or ridges in Mexico. These turtles are liked as domestic animals because of their small size. Red cheek turtle is an ideal pet for young children. 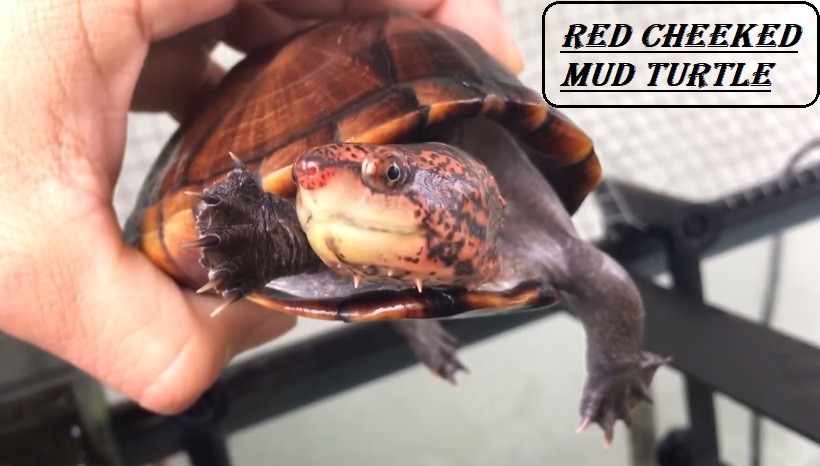 Red-cheeked turtles and musk turtles are small and rigid with a fantastic C shape. They have upper shells that are oval and yellow brighten. The partition of the upper shell of this turtle is dark brown.

Their back is less than plastron (who protects the chest)and covers the mud turtle. They possess reddish-orange color along with a few dull black marks on most parts of the body.

Red-cheeked turtle females have approximately a small size compared to male turtles. Males are around 7 inches in length with large heavy tails. Female turtles are usually 4.3 inches at a fully grown age of 10 years. Babies are about a minimum of one inch in length when born.

The mud turtle is found in slow-moving streams, pools, and bogs to large lakes and rivers Nicaragua, toward Honduras and the United States Mexico, Central America & South America. Most of these turtle species are in Mexico and a maximum of three are in South America. They like to swim in hot weather pools.

Mud turtles have longer lifespans in captivity as related to land species. The actual life expectancy of mud turtles is 40 years, taking five to six years to reach adulthood.

Red-cheeked turtles are very easy to care for. They required a minimum of 75-80 gallon water tanks to survive. Prefer to keep them in an aquarium that has both a dry land portion and water area. The range of land area given to mud turtles should be 35 to 40 percent. And, the water area should be kept from 75 to 80 percent. Thoroughly clean their vivariums regularly and also keep them well hydrated.

Baby turtles are about 1 to 1.5 inches in length when born. Juveniles naturally chose muddy areas and sandy bathes to live in and swim freely. Hatchling turtles are best to feed them on pellets and protein foods. They can also eat wax worms, earthworms, and cut fish in small amounts. They are easy to care for and handle.

Mud turtles are short-tempered and bite with their rounded and curved beaks when they feel nervous or panic. Their bite can hurt and often draw blood from human fingers. That is why they are not proven to be good pets for children at a young age.

Red cheeked mud turtles have approximately four hard-shelled eggs at a time. Incubation is fairly long that stays from about 100 to 150 days. Their incubation period happens mostly throughout the early and late spring and summer seasons. Females lay a maximum of 5 clutches per year. The annual clutch rate increases as their size expands over time.

Red Cheeked Mud Turtles are good pets and one of the prettiest turtles throughout the world. You can easily buy them online from efficient turtle breeders.

Mud turtles mixed up well with other identical-sized mud turtles. Their current prices are about $39.9 to $164.99 in stock.

Red-cheeked Mud Turtles supply them 2 to 3 times a week and bring enough calcium supplements. The mud turtle family has four ranks in their species which consists of 25 species.

1. How much sizable do red-cheeked mud turtles get?

2. What do red-cheeked mud turtles eat?

3. How much water do red-cheeked mud turtles need?

The red-cheeked turtle requires about 40 gallons of water when keeping two of the same size in the tank together. On the other hand, turtle water requirements are different. They need an average of 25 to 30 water gallons to survive.