A frog that you see today has gone through different shapes, sizes, and forms. The life that starts with eggs, and then from a Tadpoles to Frogs, is a gripping tale. The life cycle of a frog for kids is an exciting way to learn about metamorphosis. 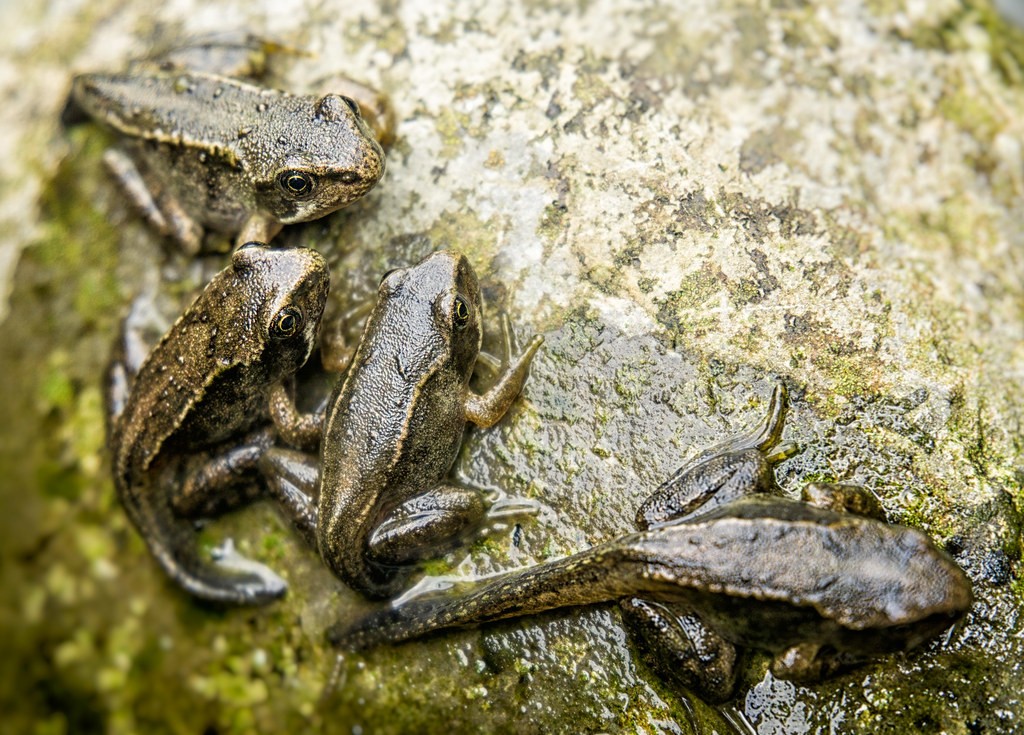 The process of Tadpoles to Frogs, like many other animals, is in the form of a life cycle. In the sequence, there are different changes and types that an organism goes through, and in the end, the whole process repeats itself.

So, it’s a circle. Life starts from the same point where it ends. Let’s find out how life begins and processes for a frog.

The life cycle of a frog

After a frog lays eggs, it goes through a series of changes and development in the process of metamorphosis. You can divide the changes into 3, 4, or 5 stages of the frog life cycle. For better understanding, I’ll be taking you through the 5 stage frog life cycle.

The life cycle of a frog explanation 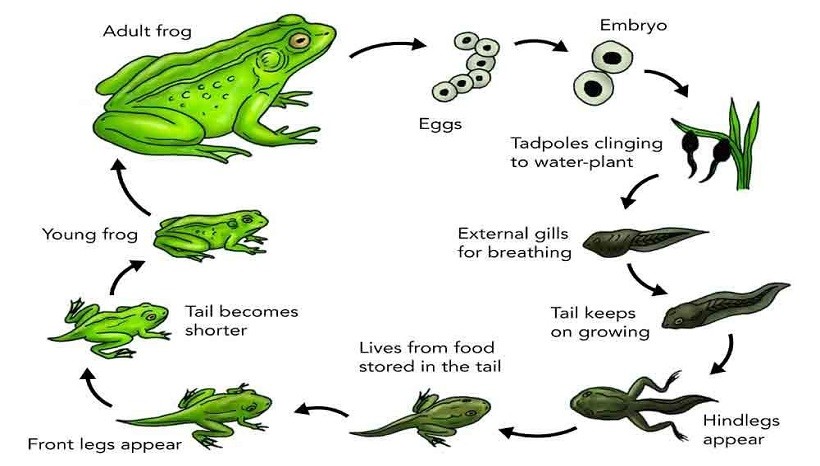 It is up to you whether you divide the process into four stages or five stages. Nonetheless, life starts with eggs that the female lays after breeding with the male. So, where does it go from there?

Well, here’s the step-wise breakdown of the life cycle of a frog.

Breeding (not a stage in the life cycle)

Before we get into the steps of the metamorphosis, the male and female frogs have to breed first. It is one romantic sight!

Frogs breed either during the spring or rainy season. The male croaks to call the female. The latter finds it attractive and moves towards her male counterpart. Then, the male grabs the back of the female and begins to fertilize the eggs. This process has a name: the amplexus.

Just before breeding, the females lay their fertilized eggs into the still water. The male fertilizes the eggs as the female releases them. The eggs are a lot! Moreover, they clump together to form a spawn.

Then, in most cases, the parents leave their eggs. However, some still look after young ones. Within a few weeks, the cells in the egg divide to give rise to the tadpoles. After a couple or three weeks, the tadpoles are ready to come out to the open. 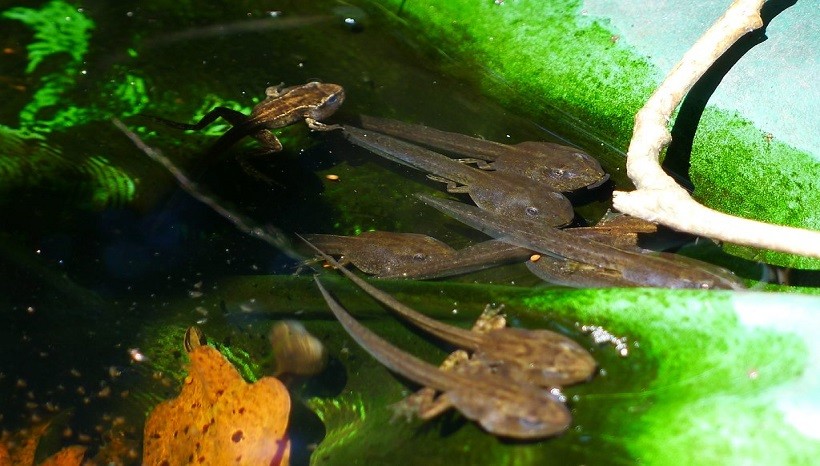 Tadpoles resemble a little fish. They are tiny and have a head, a tail, and gills for breathing. Till now, they had the luxury of getting their nutrients in the eggs. However, now they have to go out in search of the food.

At first, they will feed on the remains of their eggs. Then, the tadpoles will swim to find food. They’ll feed on algae and other little plants.

As the tadpoles continue to eat, they grow in size. Also, they start to develop their fore and hind limbs. As the legs grow, the tail begins to diminish, and the tadpole turns into a froglet.

At this stage, it has been 9 to 12 weeks. The tadpole now has a very little tail and more significant limbs. It is now a froglet, a young frog. Hey, we’re almost there!

Now, the requirements are higher than before. The diet should now consist of larger plants and even insects. Also, instead of gills, the froglet now has developed lungs. From here on out, the frog can live on land.

We are at the ultimate stage! Here, the tail is now invisible, and the frog has proper fore and hind limbs. Also, the adult completely absorbs the gills.

The adult frog is now ready to breed, and the cycle can start all over again.

A frog’s metamorphosis is a fascinating phenomenon. Here are some interesting facts! 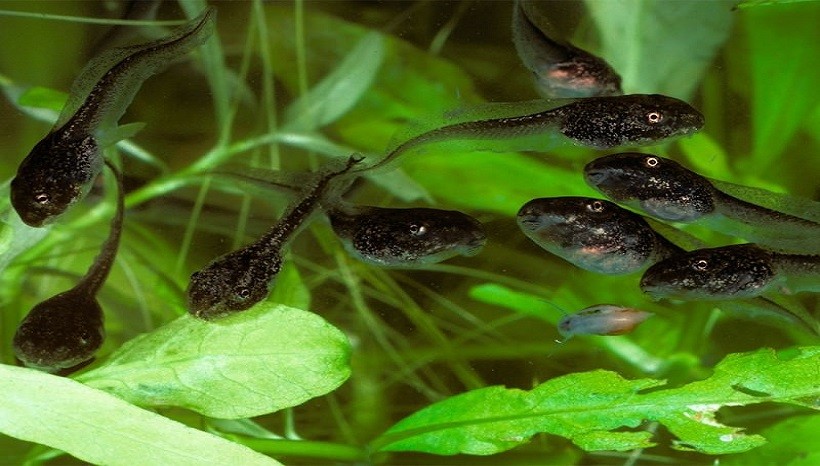 Tadpole is arguably the most crucial stage in the life of a frog, and intriguing too!

So here it is, from eggs to the adult, the complete life cycle of a frog. To go through these changes is crucial for the frog to become what it is.

First, it all starts with an egg. The male fertilizes them. From there, the tadpoles come out. They feed on the very eggs they came out of, plants, and small insects to grow and develop their limbs.

Then, the frog absorbs the tail and gills, develops the limbs ultimately, and moves out to the land. Now it is an adult frog. It can reinitiate the life cycle. Here you can read more about the steps of this process from Tadpoles to Frogs on PetsHoods.

1. How long does it take for a tadpole to become a frog?

The period of Tadpoles to Frog is different for different species of the frogs. It can be in months or even years. The quickest is the whistling tree frog; it takes only a month. Whereas, the bullfrog can take up to 3 years.

The tadpoles that are commonly around will take somewhere between 6 and 9 weeks to turn into tadpoles.

2. How many tadpoles make it to frogs?

Frogs have a lot of predators. To ensure that they live on, frogs lay up to thousands of eggs. Out of those, only a few go on to live. Usually, the number is not more than five.

3. Do tadpoles kill each other?

Yes, the competition for survival is far too high among the tadpoles. So, to live, some tadpoles release toxic chemicals to kill the tadpoles in the unhatched eggs.

4. Will tadpoles die in tap water?

Tadpoles need clean water to live. Rainwater is as good as it gets. However, tap water has different contaminations. So, unless you clean the water, tap water is not the right choice.