This baboon’s specie belongs to the Old World Monkeys and found in Africa and Arabian Peninsula. The scientific name of this monkey is Papio Hamadryas. They are quadrupedal and terrestrial primates as well. The female Hamadrays Baboon sexually mature at 4-5 years while male at 4.8-6.8 years. In this article, we’ll discuss all the details related to the Baboons Monkey. 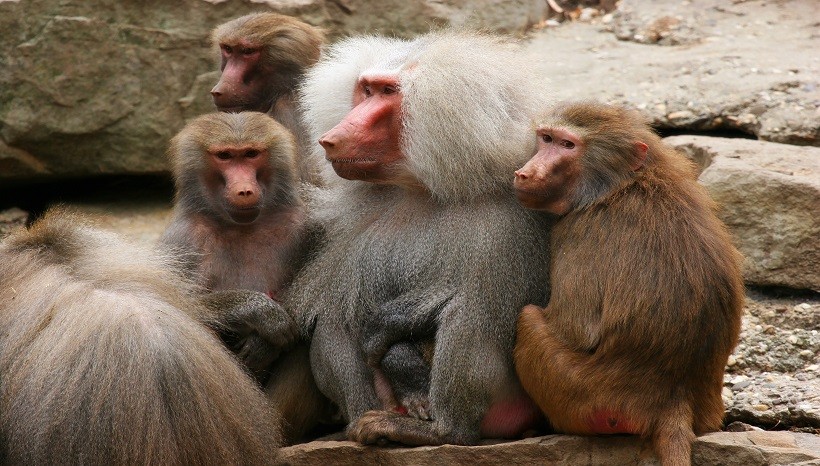 Following are the facts of Baboons Monkey:

This monkey lives in the different habitats including plains, steppe, arid brushland, sub desert and savanna. They prefer to make the home at the high cliffs where the monkey can gain water source, acacia, opuntia cactus.

The monkey is active during the day time and sleeps at night. Right after the sunrise, the monkey’s groups gather together for the monkey around. In this gathering they play, chase, and groom in one male unit called a social group.

The male monkey is cover with the brown or light grey fur. They have long silvery hair on mane with a bright pink face and back. It has a small non-prehensile tail. The male monkey weight is 20-30 kg.

The Baboons Monkey can live for 20 years.

1. Where are hamadryas baboons found?

One can find them in southwestern Arabia, Yemen and Saudia Arabia.

They are not endangered yet.

They are not dangerous for humans but can attack the dogs but have a habit of terrifying women while searching for food in urban areas.

4. What is a hamadryas Baboon Lifespan?

It has an average lifespan of 20 years.

We’ve discussed the hamadryas baboons belong from the old world monkeys. They live in different areas includes semi deserts, savannas and rocks. The monkey is not dangerous for the humans, and Egypt royals used to keep them as a pet. However, females can get frightened by them in urban areas. We’ve mentioned all the details related to this specie above.