It is the little member of the North American family of deer. They are mammals and herbivores. These deer are found in southern Canada to South America, not in Southwest, Alaska, or Hawaii. During summers they searched for the shady trees while in winters they love to stay inside the forests. 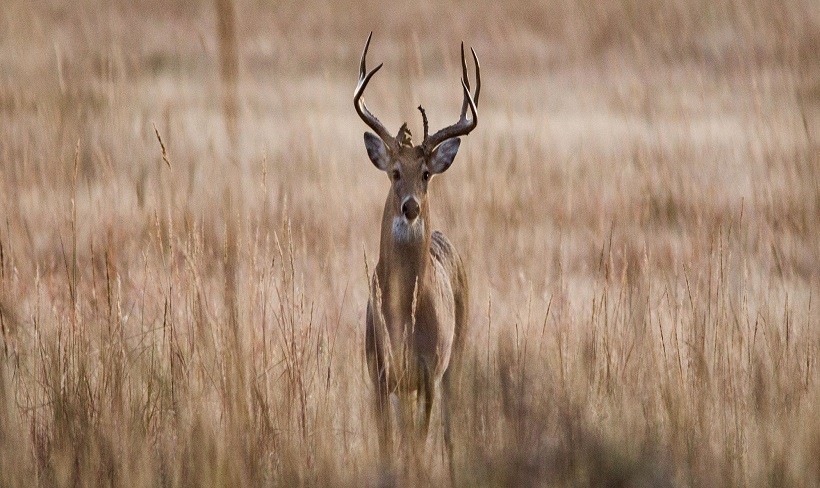 The White-Tailed Deer are also known as Whitetail or Virginia deer. They are the medium-sized deer and change its colour according to the weather. In summer the deer become tan or brown while during winters the colour of deer change into grayish brown.

The throat, eyes, nose, stomach, the underside of tail are white-coloured. The male weighs 150-300 lbs while female deer weight is between 90-200 pounds.

Following are the facts of White Deer:

White deer change its colour with the season. In summers it has a reddish or tan brown colour which changes into grayish-brown during winters. This deer has small white patches on skin around the throat, under tail, muzzle, and eyes. These deer raise their tail whenever they get frightened. This is the signal for all the other deers about the upcoming danger. The height of the White-Tailed deer is almost 6-7 feet. The bucks grow antlers during summer and shed in winters. The antlers have different points that are called tines. The length or number of tines mainly depends on age, nutrition, and genetics.

These deers always graze with the same sex group. The mating time of bucks is in September and get pregnant in winters and give birth in spring.

They are herbivores and love grazing. Furthermore, these deers have a huge stomach with 4 chambers that allow them to digest any food on the go. They go for food at dawn and dusk. These deers love to eat a variety of plants. The diet of these deers changes according to the food available in their surrounding.

There is no as such favorite food of White deer. As they love every plant-related diet. Furthermore, their food does not remain constant. They eat whatever is available. in winter they eat buds, barks or shoots because it is hard to find any other plant while in summers they enjoy eating a lot of green plants.

The Missouri Monarch is the biggest white deer. This buck has 333 7/8 inches antlers that make it the largest yet biggest white-tailed deer.

Their mating season is winters mostly in November or January. The female delivers one or twin fawns after almost 6 months. The colour of fawns (younger deer) is reddish-brown at the time of birth and changes with the age. Moreover, they can walk and start grazing food after some days. They accustom after 6 weeks.

The mother hides the infants when she goes out to search for food and the fawns lay on grown during the hiding hours. That’s why it is harder for predators to find the young ones.

The white deer can live for 6-25 years in captivity. But the white-tailed deer do not reach 18 or 25 years of age due to any disease, hunting, and any disaster. However, the average lifespan of the wild white deer is almost 5 years.

The white deer can easily adapt to any habitat. They graze in same-sex groups but mostly considered alone during summers. The bucks live solitary or with the other small group of bucks. The bucks and does never travel together and stays separate from each other besides in the mating season. They use a different source of communication includes sound. Odour, body language and scratches mark. They commonly live in a shaded areas like forests.

These deers are active yet energetic at dawn and dusk. Their home range is a square mile or even less. They have a habit to travel together in search of food. The bucks travel with the bucks group while the Does travel with the same sex group. Their mating season is winter starts in September and ends in January. They use their tail to alert other deer in case of any danger. They have adaptable behavior and easily adjust at any place.

The size of the white deer varies typically. They are 41-94 inches in length and 20-42 inches in height. However, the maximum height of a fully grown buck is almost 7 feet. The weight of male deer is 68kg while the female has 45kg weight.

They are hunted by humans, lions, bears, jaguars, leopards, wolves, and coyotes. However, the young ones are preyed on by bobcats, coyotes, and mountain lions.

These deer are found in Canada and the United States. However, it is the state animal of 9 countries. Well, the home range is the place where you live. The range of these deer is one square mile or 650 acres. It is the place where the deer spend most of their time.

1. Where Do White Deer Live?

They are mainly found in America and Canada. They settled mostly in southern Canada and the US.

2. How Long Do White-Tailed Deer Live?

The domestic white deer live for 18-20 years while the wild ones can live 5-11 years. But mostly the wild ones die earlier due to any disease or hunting.

want to learn more about pets then visit us at petshoods.com.