Rabbits do not sleep in the night hence they are not nocturnal. If you are petting a cute funky bunny you have hardly watched your rabbit active and cuddling with you as most of them are found asleep in the daylight. That’s why some might think that rabbits are nocturnal. But the fact is that they are neither nocturnal or diurnal but are crepuscular animals. 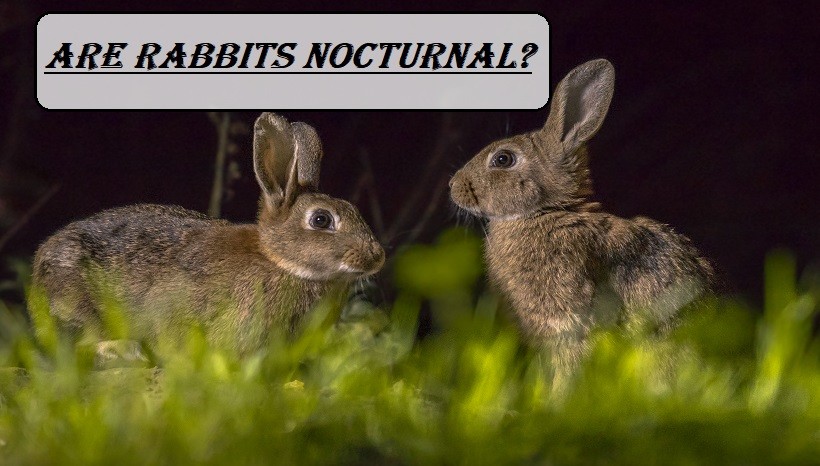 Rabbits are awake at both day and night hours. They are the most active at the twilight hours of dawn and dusk. Rabbits come out from their underground warrens when they are most likely to be free from both nocturnal and diurnal predators; in the twilight periods.

Do Rabbits Sleep At Night? – Are They Nocturnal?

Rabbits are crepuscular warm-blooded animals. They are habitually non-nocturnal. This means they do not keep awake at night. You might have doubts regarding the sleep cycle of your rabbit because they are often seen awake almost every hour of the night

Rabbits, being the prey animal for many large predators out there, mostly sleep in the mid-night hours, when they feel completely relaxed and calm about the surroundings. Rabbits do sleep in different slots of day and night including afternoon and midnight.

No. Bunnies are not nocturnal animals. They are crepuscular. Nocturnal animals sleep during the daytime. However, bunnies do also, sleep in the afternoon but it does not mean that they are night-loving.

Due to their poor vision in daylight, nocturnal animals do not assist but awake at night to find their food, such as owls. So to avoid them, rabbits do sleep in the dark hours of midnight.

Are Rabbits Nocturnal or Diurnal?

Rabbits are neither nocturnal type nor diurnal type animals. They are simply both. The adaptation to a crepuscular living of rabbits is to avoid their night and day predators as both nocturnal and diurnal predators are awake at the period of daytime and night time respectively.

As rabbits are low in class at the food chain pyramid, they can be a nice healthy meal for many predators at large. Bunnies are smart enough to fill their tummies up at the right hours of dawn and dusk.

As said earlier, rabbits are not diurnal. Diurnal animals follow a pattern just like humans do; which means, in the morning they seek food and sleep as the light dispels darkness. If you own a rabbit, you might have noticed that your rabbit sleeps most in the afternoon. Diurnal animals do not sleep in the daytime.

As Diurnal animals have an excellent daytime vision, rabbits tend to sleep in the safety of their burrows rather than becoming a snack of raccoons and foxes.

Yes, all rabbits in the wild and indoors are crepuscular. This means they are most active at the twilight hours of sunrise and sunset. Crepuscular rabbits have this instinct to munch on fresh grass and weeds, at the time just before the sun drops out the horizon and just before the sunrise.

Being crepuscular is genetic and natural to the rabbits even if their habitat is constant to a certain temperature. Rabbit’s digestion process is high at dawn and dusk, that’s why they graze upon the food in the evening hours of the day and night.

When Are Rabbits Most Active?

Rabbits have different moods at different periods. They often sleep, play, and eat according to their mood. However, all rabbits are found to look alive and playful after mid-day and before the gloominess of night.

Usually, the morning begins with going out from the safety of their warrens to find a light breakfast, followed by an afternoon nap, and then awakening in the dusk of the day, to get a quick relief into the litter, and finally ready to play and groom before the night falls.

Are Wild Rabbits Out At Night?

Rabbits are crepuscular feeding animals. The foliage on the nearby plants and weeds that are found close to their dark warrens. Rabbits do not prefer to go out in the wild because there is a great risk of being hunted by some good night seekers, such as owls.

This provides them an advantage over the night-time predators. At night, the temperatures also fall which is not suitable for a rabbit’s body temperature. Being not good at night vision, they can see a grainy view of the surroundings. However, pet rabbits often come out in the dark if they are familiar with the place.

How Do Wild Bunnies Sleep?

In the wild, bunnies are usually not addicted to sleeping at night. They always keep a cautious eye on their predators whether being out in the dark or caged in a den or resting in your home.

Rabbits, in general, are daytime sleepers. They get a good sleep of around 6 – 8 hours every day in the afternoon and are most alive and aware in the early mornings and late evenings.

Rabbit is indeed a crepuscular mammal. They are sociable and friendly in the active hours of dawn and dusk. If you found your rabbit being alive and playful in the most active hours of the day, let them do what they enjoy.

Rabbits are adapted to certain sleeping patterns and daily routines, try to figure out the ones that are best suitable to your bunny and provide a relative environment if you don’t want a grumpy bunny in your house.