Yes, turtles can make noise. Turtles lack the folds of tissue of membranes known as turtle’s vocal cords. This surely gives a nod to a question that if turtles don’t seem to possess vocal cords, then how can they produce any noise because, without vocal cords, it’s impossible to make any noise. 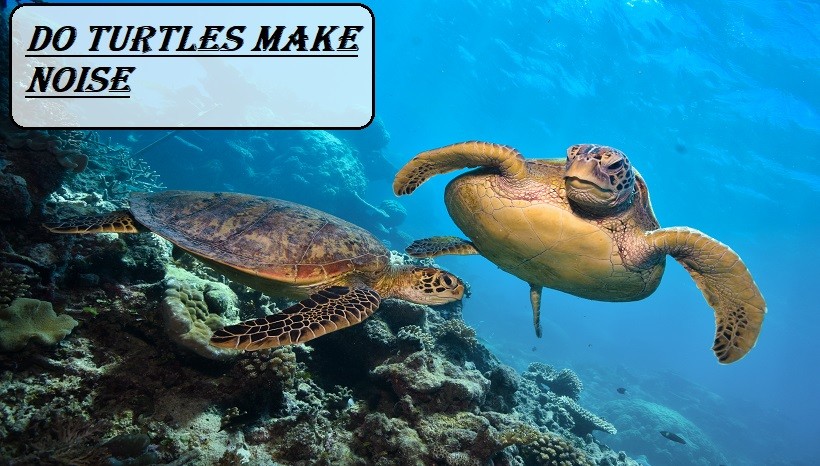 And the truth is that turtles throw the air out of their lungs and produce noise.

Researchers have found out that commonly a hissing sound is produced by turtles. Some shrieks and quiet-loud roaring sounds have also been identified, from old turtles. Sea turtles, freshwater turtles, and baby turtles can also produce noise, but those are very low-pitched sounds that are impossible to hear.

Yet, the noise-producing mechanism for every turtle is the same. When petting a pet turtle, owners are seldom notified of weird noises, pet turtles were producing more than usual. These can be a result of some respiratory infections.

How Do Turtles Make Noise?

Inside the body parts of a turtle, there are special organs that produce noise. As discussed earlier, turtles don’t have tissue or membranes, the larynx to produce noise.  Turtles sometimes use their throats to make noise. They throw out air and produce sounds like hiss and shriek. In this process, the throat and lungs of the turtles are used.

In this process, different body organs are used by turtles to produce various sounds. Moreover, turtles often use more than one organ to produce noise. As just explained, while making a hissing noise, the turtle used two organs, which are lungs and throat. Here, two organs are used simultaneously.

What Sound Does A Turtle Make?

Turtles can make different sounds. Some are quite audible and others are almost impossible to hear. Researches have shown that most of the sounds do not fall in between the range of audible sounds. Special types of equipment are used to hear and then analyze them. Based on this analysis, researchers have concluded the below-mentioned sounds which turtles usually make.

A hissing sound is made by a turtle when the turtle uses their lungs and throat and before they throw the air out of their lungs. Mostly, when turtles are going into their shells, they produce this particular hissing sound. The turtle’s shell is quite large that a turtle can easily go and stable itself in it. During this, when a turtle shrinks its body, consequently lungs also shrinks and its body fits in the shell. This compressing of the turtle’s body results in the air leaving out of the body and a hissing sound is therefore produced. Turtles sometimes also suffer through a respiratory infection, which is often caused by a bacterium. Consequently, the turtle undergoes breathing issues and struggles to breathe. This breathing conflict also produces a hissing sound.

If a turtle is suffering from a severe respiratory infection, then he makes a sound of crying. When a slippery fluid-like substance known as mucus is stuck in the airways of a turtle in an excessive quantity, it narrows the path for air to flow. This results in a crying-like sound to produce, and sometimes it is referred to as a meow sound. Mostly red-eared slider turtles make this sound when they are sick.

Land turtles, mostly tortoises make a low pitching sound known as the chirping sound. This happens when land turtles are experiencing stress. This increases the rate of breathing in land turtles and consequently, this sound is produced. The excitement can also result in turtles making this sound. This excitement can be due to new habitat, a changing environment, or if a new food is given to them. Baby turtles, and especially baby tortoises are fond of making this sound.

Why Do Turtles Make Noise?

There could be several possible reasons for turtles making different noises including hissing, grunting, chirping, and low gurgling sound, etc. Below discussed are more common reasons why turtles make such noises.

Firstly, illness, when turtles are not feeling well, they produce noise. Respiratory infection among the turtle’s lungs and uneven stress appear in turtles making the hissing sound. In this state, they sometimes also beat their shells. Owners of pet turtles constantly keep an eye on turtle’s sounds to keep a constant check on their health.

Secondly, a turtle can make noise if they fear any harm or danger in their path. Turtles are smart and intelligent. By using their smart brain, they can easily detect any danger in their surroundings. To keep themselves safe from predators, they produce sounds indicating a possible threat in front of them.

Turtles also make noises while eating. Low gurgling, honking, or quacking sound is produced by various turtle species which means either they are hungry and they are looking for food or in excitement. Old land turtles also belch while intaking food.

While turtles are making nests, they also make noise. Turtles being slow reptiles takes much time to complete their nesting task. Female turtle can’t lay eggs on every spot, she finds the best suitable place to lay her eggs, hence this process is lengthy.

A lot of noise is produced when turtles mate. When the male turtle plunges its shell into the female turtle, a loud noise is generated. As soon as both of the animals make their contact well and they are in a stable position, shrill and loud banging noise is generated. Although, these particular mating noises which are generated, differ within turtle species. Russian tortoises generate squeak-like sounds whereas tortoises with red feet generate clucking sounds, like that of clucking chickens.

Land turtles are most common to produce noise because of the environment they inherit. Whereas aquatic turtles mostly live in water and sound movement in water is very less as on land.