The Turtle shell is a living organ as important as other body parts. Turtles can feel through their bony shells. Their shells are a mixup of bones, cartilages, skin, blood vessels and nerve endings, etc. Their shells get infected, broken, cracked or injured. 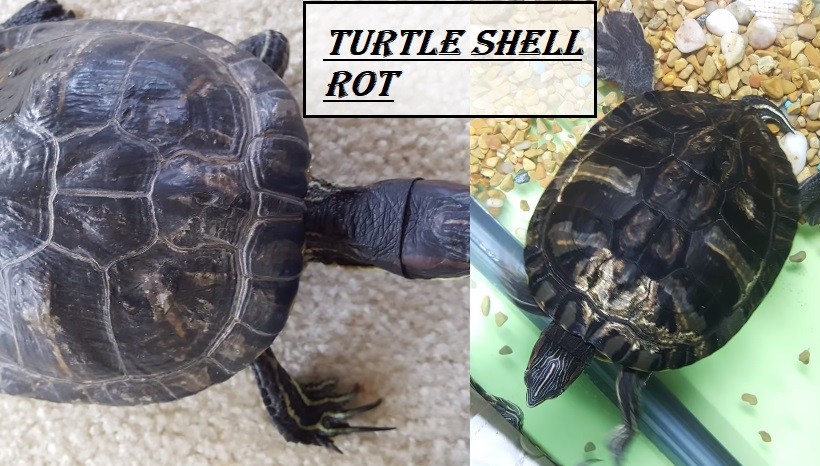 Turtle shell rot is an infectious disease consequent to poor water conditions. This common bacterial infection can happen to both parts of the shell i.e. plastron and carapace. Shell rot is basically the formation of spirals which can be a cause of ulcerative shell diseases. The overgrowth of bacteria in the shell enters their blood. It causes ulcers to form on the outer layer of the carapace. Shell rot or ulcers often lead to broken or cracked shells. Snapping Turtle Fact is the shell comes in a set of dark colors.

Shell rot appearance can be indicated by above mentioned symptoms. Also, discoloration of shell or turning of original color into white, yellowish-green or mild is a noticeable symptom of shell rot.

Shell rot can be seriously contagious in most cases. Bacteria can be easily transferred from one turtle to another. It can likely spread and infect other turtles by direct or indirect contact.

One should have to pay heed and completely acknowledge this disease. It is best to avoid keeping a healthy turtle with a turtle suffering from this infectious disease.

Shell rot might not be contagious to humans. But, it is good to take respective safety precautions on time.

Shell rot is a serious kind of fungal and bacterial infection among turtles of all ages. It is common, especially in baby turtles. Baby turtles have soft shells at a young age. Their shells can easily develop an abnormal condition.

They have immature shells at a young age that can rapidly be infected by bacteria and other fungal agents. Shell rot, if left untreated, can cause drastic systemic infections to a turtle.

Turtle shell rots can be prevented by proper care and guide. Given below are some care facts to avoid shell disorder among turtles:

How To Treat Shell Rot?

Consult a good vet ASAP! Or try to apply the following antiseptics with a complete guide to recover unhealthy turtle shells.

Coconut oil is the natural remedy to promote a strong healthy turtle shell. It can fight against a variety of bacterial and fungal infections.

Apply it once or twice a day on a shell and leave to absorb it. During this, prevent the turtle from entering into the water for 20 to 30 minutes to heal properly.

Betadine (povidone-iodine) is a vital antiseptic to treat shell rot in turtles. It provides infection protection against a variety of germs and minor injuries. It works by releasing iodine that starts to fight against harmful microorganisms.

Apply normal betadine or specific betadine made for shell rot treatment on damaged areas. Leave it to dry off and well absorbed into the affected areas. Avoid the turtle from getting into the water for about 25 minutes during this medication process.

Plain Neosporin is good to treat shell rot and other infected areas of a turtle shell. It is not recommended to apply Neosporin directly on the shell. First, clean the affected area with hydrogen peroxide.

When it gets completely dry then apply Neosporin. It will definitely work because it has efficacy against bacteria and acute mycobacteria. Use of pain revealing Neosporin is strictly prohibited for turtles.

It is the best and efficient antiseptic solution to heal shell rot. It is used as a powerful cleaner and disinfectant against 60 different bacterias. Chlorhexidine diacetate works faster than other antimicrobial and antiseptic shell rot treatments.

Iodine is an effective and safe antimicrobial use to fight against bacteria, fungal agents and viruses, etc. It is a slow and weak antiseptic and takes a little bit longer to heal properly.

However, it is best to treat shell rot when you are lacking any other antiseptics like Nolvasan, Betadine and Neosporin. Repeat to apply Iodine solution on affected or discolored shell areas after every 10 to 15 minutes.

Can Shell Rot Heal Itself?

Turtle shells are made up of living, natural and organic materials. Shells have properties of healing on their own. The overall process is quite a time taking and longer.

Shell rot is a problem that heals slowly and spreads slowly. It may take weeks and months to recover completely.

A turtle keeper should have to be patient during vet treatments or if they are alleviated on their own. It is hard to recover, if the shell sustains serious damage.

When shell rot is not treated properly, it starts to infect the systematic blood of the turtle, causing overgrowth of harmful bacterias in the bloodstream.

These bacteria rapidly affect the internal organs of turtles. It can be recovered with a variety of injected antibiotics on time and by preventing excessive entry of infected turtles in the water.

Box turtles as the name specifies have high domed shaped upper shells. Shell rot in box turtles is caused by improper water and environmental conditions. Shell rot turtles have infected plastron and carapace. Box Turtle requires great care so keeping box turtle is not an easy job to do.

It can seriously damage their shell layers and if not treated on time can harm their internal organs and bones too. Try to keep their vivarium fully clean and disinfected.

Shell rot in the red eared slider is caused by bacteria and fungus. The shell begins to show signs of losing its colors, foul-smelling, falling plates and soft pits.

It seems like the shell is eaten away. This condition can be difficult to recover but still treatable. Repair damaged shells immediately and clean the tank water regularly to avoid shell rots in turtles.

Shell rot is a common infectious disease in aquatic turtles caused by unhealthy water conditions. Turtle shell rot or shedding means one is a healthy term and the other is unhealthy. Peeling of the shell is normal whereas shell rot is a scary disease.

Shell rot vs shedding specifies that scutes of the outer layer of shell become crumble and flake in shell rot while the whole shell falls off in shedding.

Turtle shell fungus, algae or bacteria attack the tissues of the hard outer layer of the carapace. This leads to shell rot in turtles and is recognized by the overgrowth of bacteria into the bloodstream.

Shell rot results in septicemia if left untreated. The bacteria enter the bloodstream in this condition. It is an unusually severe response to an infection. It affects and damages multiple internal organ systems, leading them to fail, ultimately resulting in death.

2. How to treat shell rot in aquatic turtles?

3. How to identify shell rot?

You can see noticeable bright white spots on the outer shell layer. Scutes and pieces of turtle shell start to fall off rapidly. Shells get cracked or broken, start to bleed. You may also notice red fluid under shell plates or color fading.