Pixie Frog or African bullfrog is the world’s second-largest frog class of the Pyxicephalus family. They are known to be the biggest amphibians in sub-Saharan Africa. They can be found in water bodies and shrublands all over South Africa. 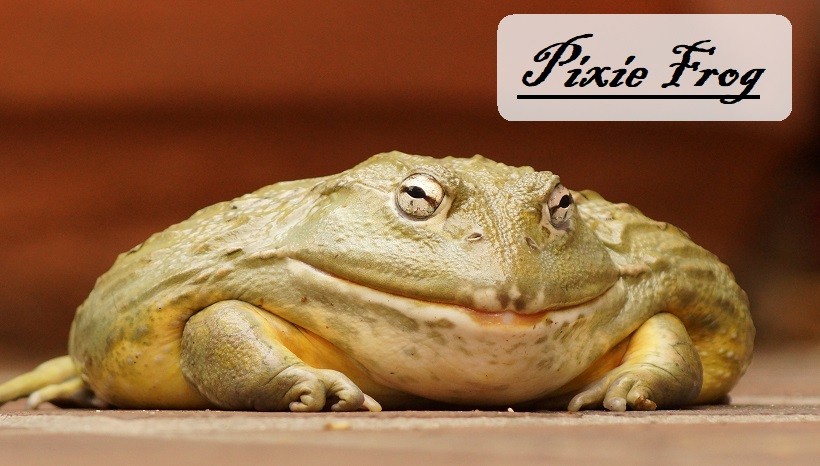 They vary less in colors and are mostly found within dark olive-green to light olive-green including tan spots everywhere. Male pixie frogs contain a throat and belly of yellowish or orange color. The Female’s ventral part is of khaki (beige) shade. They both are orange from the points where their body meets upper and lower limbs.

As they are large amphibians of greater size, males can range from about 10 inches in length and females are about a maximum of 5 inches in length or less than that. Male pixie frogs can magnificently weigh up to 2 pounds. Females are comparatively half than males in size and weight.

Pixie frogs have an exceptionally extended lifespan. These frogs can live up to 40 years if they are properly cared for. They spend 20 years of their lifespan in an underground shelter. The average life span ranges from about 20 years to a maximum of 45 years.

These frogs are moderately sparing frogs in terms of care. A Pixie frog care sheet is the simplest to maintain. Keep your pixie frog well-hydrated and properly feed them on a daily basis. A frog who is less than 3 inches in length should be fed regularly and grown-ups should nourish 2-3 times weekly for half an hour. They are capable of both dry and wet conditions according to the season going on. Keep them dry without moisture and with a minimum quantity of water in their tank for 3 to 4 months in a year. And in the next coming months, stream water into their habitat in order to remoisten them and keep them hydrated.

During the rehydrated period, provide them with a proper water area where they can soak themselves easily. They do not require light as they are the night-out species, mostly active at night.  They don’t even necessitate sunlight in the daytime. Only, provide them with a heat exhibiting bulb or a specific heat lamp to keep up residence warmth. Their care is considerably much likewise White’s tree frog and dwarf clawed frog.  Bullfrog shits frequently. Thoroughly cleaning of their pooped substrate is recommended a lot. Sanitize and refresh the substrate of Giant pixie frogs that weighs in pounds on a monthly basis.

Pixie frog tank setup should be partially terrarium and moderately aquarium as they require both dry and moist periods throughout the year. Giant male pixie frogs should be kept in a maximum of 10 to 20 Gallon aquariums. Females and infants juvenile can be put into a 5 to 10 Gallon tank as per requirements according to their size. Also, place a secluded lid on the tank and a slab bridge that helps to move your frog from the dry area to the moist area of the tank. Stroke the cage surface with bark bedding or coconut fiber-like things as a substrate to keep your frogs in pleasure by digging holes in them. You may also place flat rocks and side corners in order to put the prey insects on them. Must provide them with a heated tank to maintain the temperature gradient in the aquarium.

Pixie frog’s natural habitat is shallow water bodies, shrublands, and grasslands in sub-Saharan Africa. They require both land and water areas as a habitat. These African bullfrogs prefer to live in dry environments and spend the utmost time of the year hidden underground. They can hide in a maximum of 24 inches in depth. They only come out from these underground areas during massive rain and rainfall occurs exceptionally one time a year inside the Southern Africa region.

Pixie frogs possess a large series of pointed teeth inside jaws and a twisting muscular tongue that is able to grab the food within their mouth. Their teeth-like adaptations are known as odontoids. Odontoids help the species to catch and forcefully hold their prey. It recommends handling them carefully with a limit as a large African bullfrog is willing to bite and draw blood. Placing food in a dish is a better option instead of giving them food from your hands as they hold a painful and effective bite.

Pixie frogs are very greedy eaters and have broad mouths. They can consume a huge variety of food from crickets, earthworms, hornworms, silkworms, waxworms to small birds and rodents. They can eat all the things that can fit their mouth. Wild pixie frogs are well known for consuming other amphibians and reptiles like small snakes. Juveniles have to feed crickets of suitable size. Adults should be nourished with rodents (fuzzies and pinkies) once or twice in two or three weeks because it can lead to obesity in them. Pixie frogs eat mice that are infants, usually a few weeks old.

Supply the young bullfrogs with a calcium supplement once a week and with multivitamins between every two weeks. Supplementation is not a necessity for adults that are soon reaching old age. Some breeders prefer to gut load the insects before feeding them to the frogs. Gut loading means to feed the prey insect with a rich nutrient diet to its full and then put it against bullfrogs. This is the best way to enhance your frog diet. Pixie frogs might gain massive weight like humans because of their annual diet and calories.

Pixie frog babies are about 1 to 1.5 inches in length. These juveniles can consume a variety of food from crickets to small snakes and soon appear as great monsters. They need to be fed on a daily basis instead of a week.

Pixie frog and Pacman frog tend to possess identical physical features and similar care. They are the same in carcass size to the yellow stomach and prefer rodents in the diet but vary in other body parts color.

Pixie frogs are Africa’s largest and rank on the world’s second-largest frog. They are well recognized because of their giant size. They can live up to a lifespan from about 20 to 45 years. Pixie housing tadpoles and juveniles range about 1.5  to 5 inches in length. Pixie frog pets are proven to be exotic all over the world. They breed mostly in rainy seasons as they come out of their hidden underground places only during heavy rain.

Moreover, they prefer to live in a dry as well as a moist habitat. They have sharp teeth like projections that make their bite painful. They eat a variety of food from worms and little insects to mice and often small snakes. Pixie frog for sale is currently available in entire Southern Africa and the whole world.

You can buy a pixie frog from a reptile store and there are a number of online sites that are selling their reptiles including baby giant pixie frogs to adult pixie frogs on sale. Always carry them in a safe enclosure as they can bite humans painfully.

2. How often do you feed a baby pixie frog?

3. Why is my pixie frog always buried?

They like to hide underground throughout the year. Sometimes they were buried to attack the prey. They also hide in winter to protect them from severe weather conditions.