Betta gasping at the tank’s surface, showing changes in their color, turn to pale or yellowish, start to possess weak tail edges are common behaviors they exhibit before death. Unresponsive cold eyes are a major indication before death. Also, their gills start to provoke apparently. Its Betta Fish Behavior Before Death. 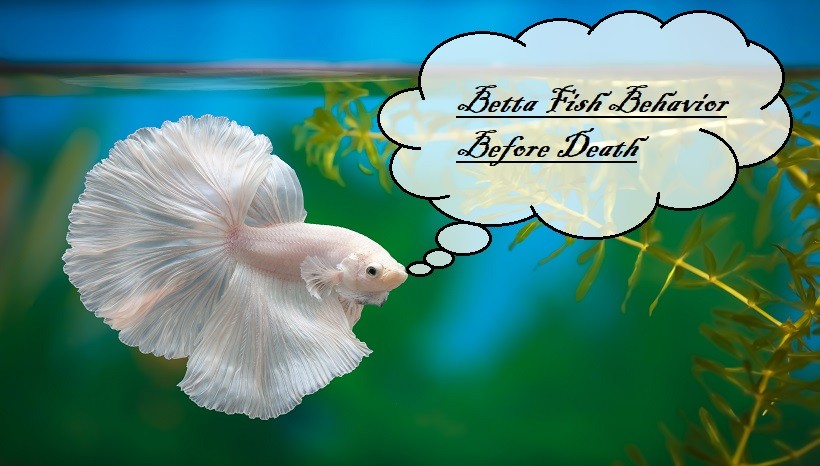 Betta fish starts to sleep more, feels muscle weakness, and shows a feebleness tail, becomes less social, and short to breathe. These all are the early signs before death. Moreover, their appetite level and body wastes decrease abruptly. Their skin becomes cold. Right before few hours of death, the chemical balance of their body comes to be entirely upset. They fell into a state of unconsciousness.

Poor water conditions mostly cause a betta fish to die. Non-optimal water conditions lead to a variety of infectious death-causing diseases like dropsy, swim bladder disorder, and constipation. Popeyes and bloated betta belly may also result in the death of the species if they are not recovered at the time. Furthermore, overfeeding and loss of appetite also starve a betta fish to death.

Betta fish behaves communal when they are healthy. They begin to follow their keeper all over the tank. And, starts to float upside down actively around the sides of the tank. Whenever the keeper looks into the tank betta fish tends to move quickly on the top surface. They also do some other actions either to attract their mate to copulate with them.

Betta fish is mostly a misunderstood species. If they are simply sitting on the bottom of the tank then it implies a normal betta fish behavior. Sometimes betta fish behaves lazily and sleeps most of its time. This is also normal till it appears healthy and totally fine. They also stay on the leaves of plants. If they are trying to tickle themselves underneath the corners that means they are in need of some hidden spots in their habitat.

Sick betta fish never behave like normal healthy fish. Their activity level becomes low all of a sudden. It starts to respond less. And mostly hide on the bottom of the tank. Sick betta fish lacks aggression. It refuses to take normal feed. It may begin to show visible signs of color fades. Betta fish also stressed out when become sick.

Happy betta fish always respond actively. Whenever the food is supply to them, they fall to prey it and swim on the surface instantly. Taking food in large quantities also identifies that your betta fish is happy and in a good health. They often flare when they are happy or excited, mostly at the feeding times or when their keepers come to play with them. They tend to swim everywhere in the whole tank instead of floating on the base. Lacking any color fades is also a sign that your betta fish is safe and sound. Bright-colored betta fish is definitely happy fish.

Expanding their gills to get in water and oxygen at regular intervals also shows your betta is happy and fit. Making bubbles nest on the surface of the tank also demonstrates that betta fish is happy and satisfied with the environment given to them.

Betta fish only shows aggressive behavior when they sense something is wrong among them or their territory. In this condition, they become completely stressed out and begin to offend with one’s finger. Domestic or wild betta fish only give signs of aggression when they found the appearance of a tankmate. To display an agonistic behavior male bettas start to provoke their fins and tail, also they are naturally agnostic for copulating. Sometimes food and mating factors are the reasons that tend betta fish to show aggression (agonistic behavior). Betta fish flare and bite other tankmates in aggressiveness. Flaring gills is also an aggressive behavior that happens when the betta fish poses a threat in its territory.

Females are less agonistic than male bettas. These are known to be more friendly, understanding, and tolerant. They also fight to defend their own territory as all betta fishes show aggressive behavior in this case. But their fights are less brutal and results in minimum or no injuries as compared to male bettas. Sometimes, they also behave tolerant and friendly with their tankmates and begins to enjoy their company. They also responded to a male betta fish mating intentions

Female betta fishes are well known for their mate choices. They choose their sexual companions on the basis of their sizes, behaviors, bubble nest quality, territory, and fin lengths. Their colors become dark and they develop barring patterns to show their willingness for mating, often get a white spit on their belly. On the other side, male bettas build bubble nests and try to divert the female’s attention towards them. They start flaring gills and moves around just to attract them. They both demonstrate each other by a variety of behaviors whether they are ready for mating or not.

Betta fish behave inactively and respond less when they become stressed out or fighting an ailment. These various symptoms determine that your betta fish is not well and about to die. Siamese Fighting fishes are aggressive in nature. They flare gills when they are happy and most of the time when they are angry with other tankmates. Female bettas are less aggressive and more friendly as compared to male bettas. Betta fishes show a diversity of behaviors according to the conditions i.e during mating. Hopefully now you now Betta Fish Behavior Before Death.

1. Do Betta Fish Fight to the death?

It’s not always possible that betta fish fight to utter death. However, betta fish fight also becomes cruel sometimes. They injured their rival’s tail, fins, and gills by biting or thwarting them. These injuries with infections may later cause the death of betta fish. They often fight to the death as they are territorial species.

2. How long can betta fish go without food?

Betta fishes can survive mostly 10 days or to weeks without food and even more according to their health level. Keeping your betta fish without food for at least 5 to 6 days is basically starving her to death mode. This may lead to organ failure and cessation of kidneys.

In this article we let you know about Betta Fish Behavior Before Death. for more info please visit Petshoods.