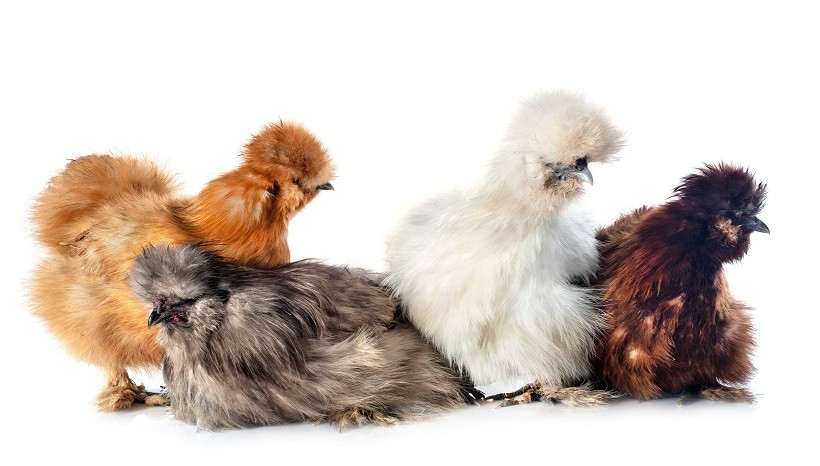 Silkie Chicken is such a cutest breed of the breed named for its extremely different plumage that gives silk or satin. However, this breed comes with many other special yet unique qualities, including black bones, black skin, five toes, and blue earlobes.

Due to all the different features, this chicken stands out of the crowd and becomes the center of attraction wherever it goes. People often enjoy watching them in poultry shows where they appear in multiple colors to gain everyone’s sight. It is the fluffy chicken breed.

Silkies come in two types including bearded and non-bearded. The bearded silkies have extra features below the beak areas that cover the ear lobes. However, the non-bearded Silkies are the same as the bearded ones, but they do not have a fluffy beard around the face. Moreover, their wattles are apparent while beards have smaller wattles.

The silkies are famous for their friendly and calm nature. However, they are docile in nature and have a friendly temperament. These chickens are broody and care for their young ones exceptionally more as compared to other breeds. However, this bird has good layers and has the capability to lay 3 eggs per week.

Another unique feature about them is they hatch the eggs of other breeds due to highly broody nature. One can easily keep them as a pet due to super cool nature.

This chicken has a fluffy appearance with the black bones and skin. The chicken is covered with soft yet fluffy fur. It has a crested head with a walnut comb. Furthermore, they have turquoise blue earlobes, and wattles are dark in color. Silkies have a short beak and broad base with blue or grey eye color.

This chicken can live for 7 to 9 years and live longer if you provide them adequate care.

The silkie chicken lay a good number of eggs that are cream in color. However, the production of silkie chicken eggs per year is 100. Their egg production could be interrupted due to their highly broody nature. This chicken can easily sit on 10 bantam eggs.

This chicken is covered with black silk or satin-like plumage and originates from China. Same as another black color silkie has 5 toes, black skin, black bones. Their nature is friendly, and can easily adjust to any environment. Furthermore, blue silkies make good mothers and love to adopt baby ducks.

The pure white silkie is the most common color available anywhere around the globe. It is the ideal color for silkie. This colored chicken has a body full of white fluffy fur with no stiff quills and yellow tint in the plumage.

This is the absolutely stunning colored silkie chicken found in both breeds, including silkie miniatures and bantam breeds. The blue silkie looks extremely beautiful with the fluffy body covered with the color, and another structure is the same as the other. Despite their body color, they also lay cream color eggs.

Blue silkie chick is considered as one of the unique birds with a different color. They have beaks, toes, legs, and skin black in color. However, some of the chicks contain beards or muffs, while others do not have it.

The buff silkie chick is a gorgeous variety of chicken, mainly originated in Japan and China. These chicks are brown or straw-colored along with the brown streaks on the back. However, their skin, legs, toes are black, the same as others. These beautiful buff silkie chickens are trendy due to attractive color and good nature.

They are the kid-friendly chicken that performs well with all the other breeds as well. This breed was discovered by Marco Polos and recognized by American Poultry Standard For Perfection. However, they have white color when they are born but change it gradually with time.

The accepted silkie chicken colors are:

These chickens are covered with the heavy plumage that makes them unable to fly. Due to this feature, they can make good pets because keeping them will be easiest for you. Furthermore, they are known as the calm, friendly, and cool in nature that makes the exceptionally perfect pets for a home, especially for the ones that have children.

Here are the caring tips for the silkie chicken:

You can get them on sale from anywhere around the globe. They are available at a variety of online sites including olx.com, exoticbirds.com, and others. However, this beautiful chicken’s cost starts from $20 to $120 per bird depending on the breed and color you choose.

It is a different breed and can lay 3 eggs per week. However, they are beautiful but do not consider the layers. The egg production by this breed per year is 100.

One can eat the silkie eggs, and they are good as well. Due to the variety of food, the egg yolk of this breed is larger.

3. How long does silkie chicken live for?

They can live for 7 to 9 years depending on the care you provide.

This chicken is quite small and can grow up to 8 to 14 inches only.

Due to the unique body and extra fluffy look, this breed has always been the sight of everyone’s attraction. The simple chicken breeders always look to have them as a pet due to their attractive looks. However, these are good in nature and can make good pets. Furthermore, people use them in the poultry shows to gain audience attractions. This chicken can lay eggs and eat a variety of foods.