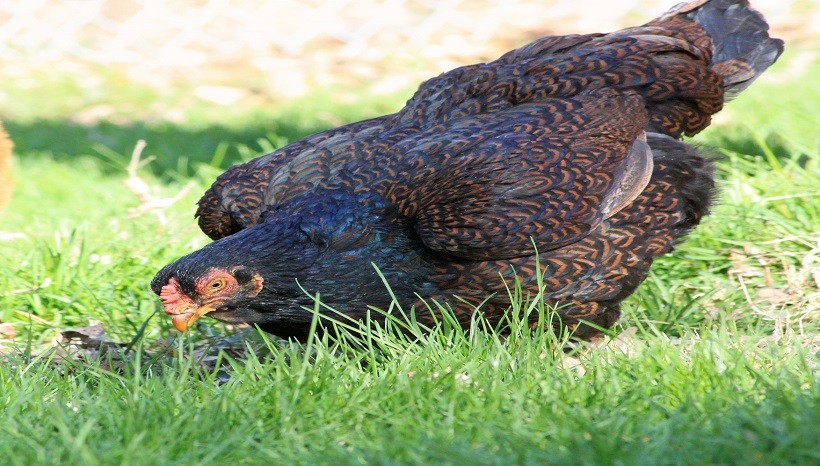 It is named because this breed belongs to the country of England called Cornwall. It was named in 1910. Firstly, the chicken was known as an Indian game or later as an Indian Cornish game. The name was confusion and in 1910, this was named Cornish chicken to eradicate the confusion. But in Australia, it is still known as the Indian game.

It is a large breed and is often bred with other breeds usually to enhance meat production. It has two varieties namely the Cornish game and the jubilee game. The color of the Cornish game is dark blue-green having brown patterns on it. In the UK and Europe, this breed has double-laced colors such as double laced blue. Usually light wheaten with light brown patterning is common in Cornish chicken.

This breed is crossbred between Malay breeds. It has a good mass weight and thickest chest. Cornish rock color is a white and yellow comb. The male of Cornish rock breed is used to produce broilers so good meat variety can be obtained.

These are fast-growing chickens with more meat. Thousands of Americans raise this type of chicken across the country and use this for commercial purposes. The weight of Cornish rock chicken is around 5-6 pounds. It takes 49-56 days to get mature and meaty.

The female Cornish chicken is called hens that are used for egg production and also for the meat. However, there are some differences between the Cornish chicken and Cornish hen. Moreover, chicken is more versatile as compared to the hen. The weight of a Cornish hen is one or two pounds and hens are butchered at a young age to make the tender meat instead of when the chicken is cooked. Furthermore, Cornish hen has a lower fat, low cholesterol, high niacin that aids in boosting brain functions.

It is the most remarkable chicken with excellent meat production. This is the hybrid chicken that developed through the crossing of white rock chicken with the commercial Cornish chicken. They have broad breasts, white plumage, thick thighs, and yellow skin. These chickens have fast growth and efficient feeding. This is the top-selling bird for meat production. Furthermore, the Cornish cross chicken has a smooth look and fine feathers.

The Cornish hen origin is England. This was originated from Cornwall and gained popularity in the US. It comes with a different body shape as compared to the other breeds. Furthermore, males as well as females containing short legs with broad muscular breasts. In 1905 the American poultry association changed the name of this chicken from Indian Game to Cornish Indian Game but later on, in 1910 the name changed to Cornish.

The dark Cornish chicken is famous for the delicious meat flavor of the large breasts. Furthermore, they can avoid predators. It comes with the pea comb and is considered as the cold hardy breed. Furthermore, this chicken can lay 160-180 eggs per year like Lavender Araucana Chicken which can lay 120-170 eggs per year and have fair layers. However, Cornish hens are broody and make good mothers. This chicken is not good to keep as a pet due to its defending nature. They somehow defend themselves from any predator attack and always try to avoid the humans or to get in contact with them. Due to their body shape, breeders tend to produce this chicken through artificial fertilization.

One can find this chicken at any bird’s shop nearby. However, you can also buy them online from any store including orctcsl.com, strombergschicken.com, purelypoultry.com, cacklehatchery.com, and polutryshowcentral.com.

1. What is the difference between chicken and Cornish hen?

Cornish hens are butchered at a younger age and can make tender meat as compared to the chicken.

2. Where did the Cornish chicken originate?

It originated in England.

3. What is a Cornish rock chicken?

This chicken was produced from the breeding of Cornish and Plymouth rock chicken.

4. How long do the Cornish chickens live?

The chicken can live for 12 weeks. However, the lifespan depends on the care you provide.

This breed belongs mainly to England. It has heavy breasts and the ability to produce brown eggs. Moreover, to enhance meat production breeders tend to cross them with other breeds. This chicken is also a popular show bird and is aggressive. You can keep on your farm for meat production due to the incredible flavor. However, they are broody but natural fertilization is difficult.