Olive Baboon monkey is also known as Anubis baboon. It is the member of the old world monkeys with the order primates and scientific name Papio Anubis. This monkey is in 25 different countries. It comes with the pointed muzzles and has a dog-like appearance. 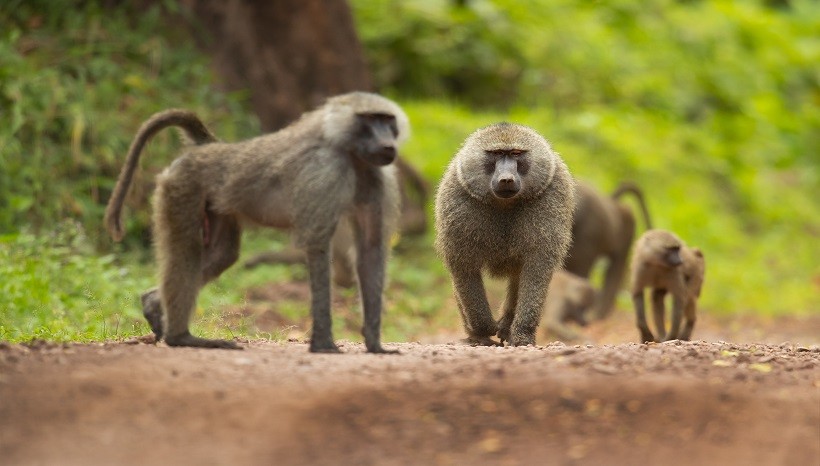 It is a large animal with muscular limbs, long muzzles, and walks on their four legs. The monkey has long tails and runs like a horse. However, they are known as the most identifiable monkey around the globe. Their bottom is hairless, which can turn red but do not have a prehensile tail. It is covered with a greenish-grey coat and has yellowish black rings due to which their body shows multiple colors. However, babies are born with black skin that changes with age.

Following are the Olive Baboon Facts:

The Olive Baboon Baby comes with the black skin and bright pink skin. However, their skin darkens with time. Moreover, the monkey’s coat changes into a colorful one at the six months and develops adult characteristics.

The monkey lives in a group where males and females are friends. They relax, groom, travel, and search for food together. Furthermore, they care for each other to sleep together. However, the animal is always ready to defend their partners and infants as well.

The monkey can live for 30 years.

1. What do olive baboons eat?

The monkey can eat invertebrates, small mammals, insects, and plants.

2. Where does Baboon live?

You can find this monkey in the areas of Africa and Arabia. They live in the hills situated near the red sea.

3. How long do baboons live?

They can live for almost 30 years.

This monkey is rarely, or you can say, not dangerous to humans. However, they often bite the dogs but do not harm humans. Furthermore, the monkey can frighten the women in the urban areas; otherwise, they don’t attack unless you threaten them.

We’ve mentioned all the details regarding olive baboons in the article. They have a dog-like appearance with multiple color coats. One can keep them as a pet if allowed in your state according to the laws. However, the monkey’s diet is the same as others including plants, mammals, invertebrates. No doubt, they are intelligent and not dangerous. You can find them in the hilly areas of Africa.

Related: Breeds of Capuchin Monkey as Pet Care, Facts and All Information