Tufted Capuchin is also known as black-capped Capuchin, pin monkey or brown Capuchin. It belongs to the New World Primates which live in the tropical regions. One can find this monkey in the areas of South America. However, it is considered as one of the highly widespread primates in neotropic. 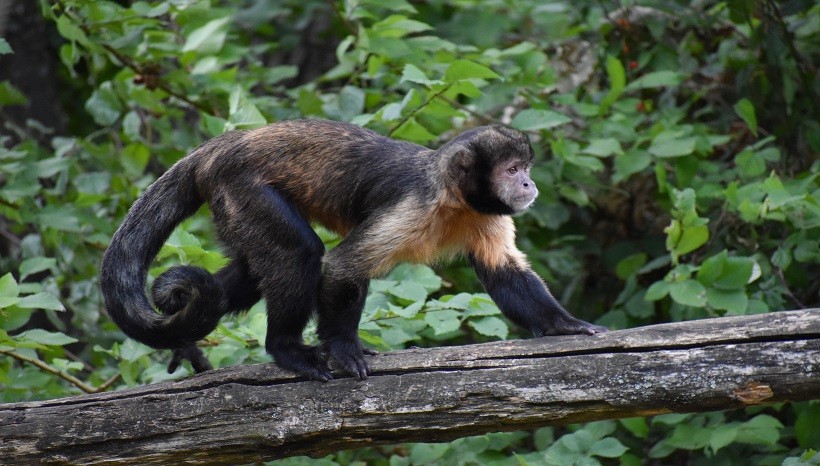 Furthermore, omit black and golden bellied Capuchin in this genus because they are separate and have another family. The monkey belongs to the family Cebidae, class Mammalia, genus Sapajus, and the scientific name is C.apella.

The monkey has a robust construction, long thick tail and body is covered with dense hair. It has a wig-like hair shape on the head. However, the monkey body contains rougher fur. It is brownish-grey in color, and the rest of the body has light color hair. Furthermore, limbs are black in color and a prehensile tail. Due to the tufts of hair at the head above ears, this monkey is called tufted. It has pink and brown shades on its face. Additionally, males come with darker facial hair as compared to females. Their tail is quite strong and helps in the movement.

The Tufted Capuchin Lifespan of this monkey is 15-25 years.

Following are the facts of tufted Capuchin

You can get the monkey from any nearby pet shop. There are multiple sites online at every state and internationally as well, where these monkeys are available. However, before purchasing, make sure to check your state laws if it is allowed to have a monkey as a pet in your country or not. Moreover, the cost of this monkey is $5000-$7000.

There is already a debate among researchers about the Tufted Capuchin Breeds, or you can say subspecies. Some announced a few monkeys as their subspecies while others consider them a whole new species. However, the breeds are as follows:

The monkey comes with the prehensile tail that has enough power to hold objects and helps in the movements as well. Furthermore, the tail length is 38-56 cm same as the body length.

1. How long does tufted Capuchin live?

They live for 15-25 years. However, if you provide adequate care, then they can live for more than 25 years.

It has been known about the primates that they become aggressive once the monkey gets sexually matured. However, you can say that it is quite dangerous to keep them home as a pet due to the highly dynamic nature.

They have appeared in the list of threatened species of 2020 by IUCN.

4. How many types of Capuchin monkeys are there?

They are 5-6 species of a Capuchin monkey and different subspecies as well.

It is one of the diurnal monkeys who are active at the day time and love to spend time in trees. The monkey searches for food by jumping from one tree to another or walking too long. Furthermore, they have a habit of living in a group of 10 to 15 members. The average life is 25 years, but it has been recorded that a tufted Capuchin lived for 45 years in captivity. Moreover they are smart enough to learn new things and love to play with objects.