These monkeys belong to the genus Saimiri and subfamily Saimirinae. The Monkey Squirrel lives in South and Central America. This monkey prefers to live in the primary or secondary forests. They are omnivorous, and the Squirrel Monkey Diet includes fruits and insects. Monkey Squirrels live in groups that can be as many as 300-400 usually. The groups found together to search for food only. They are 12.5 inches long with the 1-2 pounds weight. 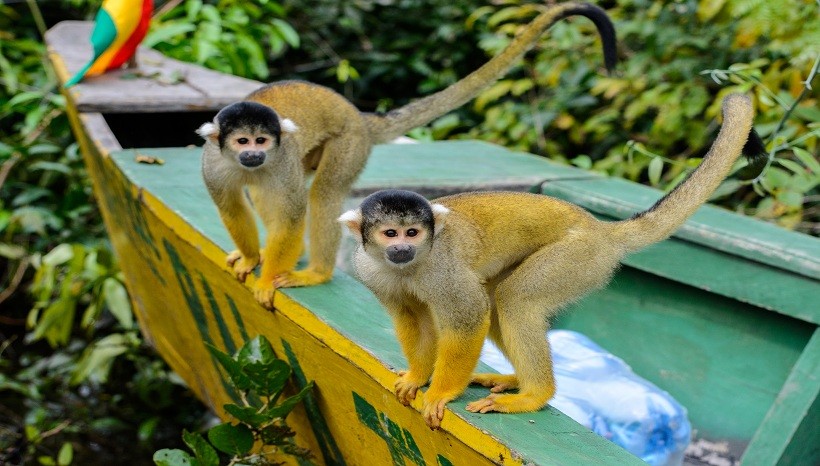 The Black-Capped Squirrel Monkey found in South America. They live in gallery forests and also have a habit of living in forest edges. The monkey stays in the small branches.

Black-Capped comes with a long, egg-shaped head. It has a small facial bone with a large skull. The monkey has short and dense fur, tan yellowish color mixed with the black color. It contains yellow, orange, and white shades inside the limbs. Both genders have the same appearance, but the only difference is of crown fur. However, females are smaller than males. They have a mask-like face due to the white patches on skin and eyes. The ears are white and more significant than the head. The length of the tail is more than the body and has black color.

Male is dominant as compared to females due to the fierce fighting and urine washing behavior. They have a habit of urination on hands, feet, and bodies to leave their traces wherever the monkey goes. The monkey is one of those that has playing nature. Offspring play with their mother while the adults play with other adults. It is one of the rare behaviors found in any animal.

This is a common name used for the small Monkey Squirrels found in South America. They live in Brazil’s forests, and one can find them easily in primary or secondary forests. These monkeys love to spend their day in the middle level of the trees. They are commonly active during day time. The average lifespan of a common monkey squirrel is 21 years.

They are covered with gray color and short hair. The arms and legs contain bright yellow color and white fur around the eyes plus on cheeks. Their mouth comes with a dark gray color. Instead of claws, these monkeys have nails and no prehensile tail.

They are active at day time and rest during nights. These monkeys spend their day searching for food and have water surrounded activities. This monkey can quickly run from one branch to another in the blink of an eye.

The Adaptations include teeth, tail, fingers, and movement. They have sharp teeth with the larger cusps that allow them to gulp the insects. Furthermore, the monkey tail is neither prehensile and can quickly grasp trees or other objects. This monkey moves by leaping and using the thighs for individual adaptations. Their thighs are quite smaller than the legs. 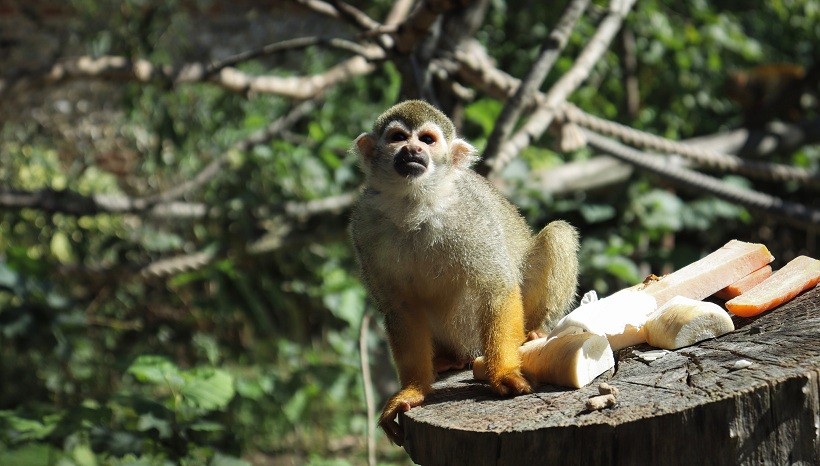 They love to spend time in primary and secondary forests. One can find them in the gallery forest or at their edges. However, the monkey prefers to live in the woods of the intermediate level. But you can see them on the grounds as well.

Here are the Facts For Kids:

The mother squirrel can only deliver one baby at a time. Their pregnancy stays for five months. During the first month, the female carries their Baby Monkey Squirrel on the back. However, males do not contribute to infant care at all. During the early days, the mother feeds the baby and keeps him/her safe from any attack while living in the wild. One can easily find the Baby Squirrel Monkey For Sale at an animal shop in South or Central America for adoption.

The size of the squirrel monkey depends mainly on its breed. Common squirrel monkey comes with a weight of 200 g while black- monkey has 620 g and bare eared squirrel money 730 g. Furthermore, the black monkey has 780 g, and the Central American contains 590 g of weight.

The male length is approximately 68 cm, while the female has 66 cm.

The maturity age for the female Monkey Squirrel is 2-2.5 years, while it is 3.5-4 years for males. Their average lifespan in the wild is 15 years and more than 20 years in captivity. You can get the Squirrel Monkey For Adoption once they get matured so it will be easy for you to handle and provide adequate care.

The other name for this monkey is red backed squirrel monkey. One can find them on the Pacific coast of Panama and Costa Rica. These live in the primary and secondary forests the same as the other breeds. Their birth rate is one per year, and the baby is born mostly at night.

They have an orange back and the shoulder covered with the olive color. It has orange hands and feet. The top of the head has a black color that makes it look like wearing a black cap. The tail is filled with black color from the end. Males come with lighter caps as compared to females. Their face is pure white and black patches around the nose, eyes, and mouth.

The average lifespan of this monkey is 15 years.

Their tail is not prehensile, which means they don’t use their tail for grabbing. The only function of the tail is to maintain the balance. Their tail length is 35-42 cm. However, these monkeys have tails larger than the body length.

These monkeys are the smallest ones but one of the clever among the others. They have a little body and a large tail. The monkey uses their tail for balance instead of grabbing anything. Moreover, their reproduction is different from others; the female can produce one baby at a time per year.

They have a high voice and travel in the groups. Males are larger than females. The monkey is omnivores so they can eat both fruits and insects. You can keep the Squirrel Monkey Pet if you want. One can easily Buy Squirrel Money for $9000.

1. What does a squirrel monkey do?

These monkeys spend most of their time in trees. They are omnivores. Their eyesight is superb, so they can easily distinguish different colors. The monkey is talented and smart enough as compared to others. They travel in groups, have high calls, and jump from one tree to another by using legs.

2. Is a squirrel monkey aggressive?

Aggression is most common in them. They often fight and develop massive scars in the body as a result of the extreme attack.

3. How long does a squirrel monkey live?

4. How much money is a squirrel monkey?

People have a habit of purchasing different animals, and this is one of them. The average cost of squirrel money is around $9000.

5. What does squirrel monkey eat?