The Gelada is also called Bleeding heart monkey or gelada baboon. This monkey belongs from the family of Old World monkeys. We use this common name for all the monkeys from the family of primates called Cercopithecidae. There are almost 138 species in this and Gelada is one of them. They are not like true baboons due to the nostrils with some distance from the muzzle tip. This monkey is the world’s most terrestrial primate and the only surviving species of grazing primate. 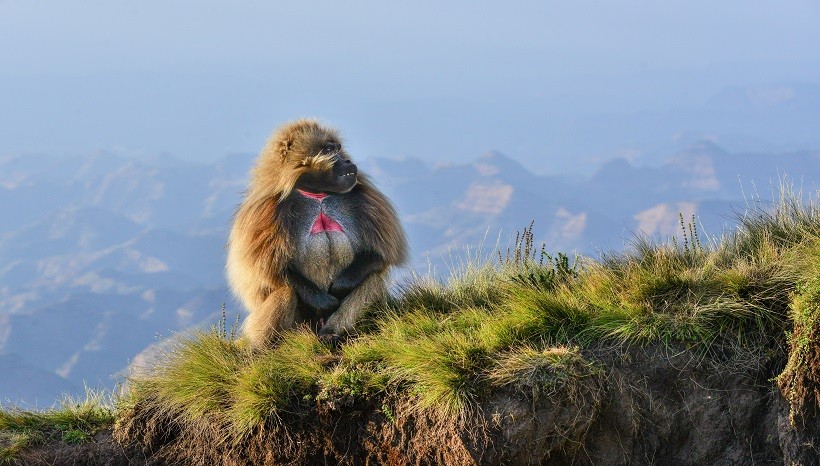 The Gelada Baboon are the last survivors of the primates with the habit of grass eating. They are mammals and live in the high mountains of Ethiopia. The monkey spends their days sitting, munching on grass or herbs and plucking them. However, their sitting pads are fatty that adapt their sitting habits already. They create large groups due to the grazing behavior. However, males are larger and hairier as compared to females.

The monkey is vast and has a strong body structure. The scientific name of this species is T. Gelada belongs to the order primates, phylum Chordata, and genus Theropithecus. It is covered with dark brown hair and face is dark but pale eyelids. However, the monkey’s limbs are almost black and short tails with tufted hair. Furthermore, the males come with considerable hair cape at the back as compared to the females. Additionally, their face is hairless and shares similarity with the chimpanzee. The male’s mane is 28 inches long. The female monkey contains a bead-shaped row, which gives the appearance of a necklace at the edges of the bare chest.

The Gelada Monkey have a habit of living in the multilevel society, which is similar to hamadryas baboon. However, the smallest family among them contains one or more males, 2-10 females and their children. However, these small family units combine to build bands which move from one place to another during day time. The monkey has multiple sounds which show their emotions according to the situation.

The females are smaller than males and covered in less hair as compared to the males. The females mainly focus on social interactions and create social relations with the other family unit. They produce one infant at a time and deliver after every two years.

The monkeys have different adaptations for the grass eating and terrestrial lifestyle. Their fingers are created in a way to pull the grass easily. However, the small incisors can chew the grass without any issue.

Following are the Gelada Baboon Facts:

1. Why do geladas have red chest?

They are called bleeding-heart baboons due to the red chest, which changes their appearance during the reproductive season. Furthermore, the hairless red patch on the female is the sexual cue for mating.

They are not aggressive towards humans. However, the sign of their aggression is flipping upper lips to scare the opponent.

3. What is the deadliest monkey?

Mandrill is the world’s most giant and deadliest monkey.

They eat grass, blades and seeds.

The monkey lives on the high mountains and differs from others due to the nostrils. They are large, stocky monkeys and known as bleeding-heart due to the red patches on their chest. The monkey is the only species of the primates that spend life grazing. The monkey reproduces one infant every two years. They are friendly and live in small family units.