The proboscis monkey is also called bekantan in Indonesia. It is recognized with reddish-brown skin and color and long tail. It is also called a long nose monkey. This type is mostly found in the southeast Asian island of Borneo. In mangrove forests, it happens to be found mostly and also on coastal areas of the island. 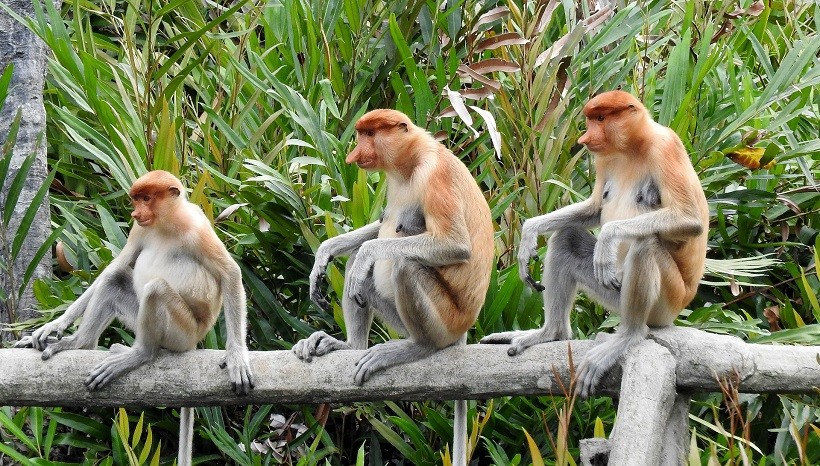 These species live with the bornean orangutan. It belongs to the monotypic genus Nasalis. The proboscis monkey is the largest species of monkey in Asia.

There is sexual dimorphism in this species. Males have a head-body length of 66 to 76.2 cm and typically weigh 16 to 22.5 kg. The maximum known weight of a male monkey is 30 kg. Females have 53.3 to 62 cm in head-and-body length and weigh 7 to 12 kg. Maximum weight of a female monkey known is 15 kg. Further adding to the dimorphism is the large nose, which can exceed 10.2 cm in length and it hands over the mouth.

Proboscis monkey fun facts include, these are mostly aquatic than any other species of monkeys. They are arboreal and move on four legs. They hop from branch to branch and ultimately descend in water. Webbed toes help them to swim up to long distances. Proboscis monkeys have a protruding stomach that enables them to digest the unripe food.

These monkeys live in forms of the group which has both male and female proboscis . At the age of five years, the proboscis female monkey gets sexually mature. Mating takes place in February and November. The gestation period is from 166 to 200 days. Young ones are weaned at seven-month-old and begin to eat solid food at six months. Infants are at risk of infanticide when a male member of the group is replaced because the male remains the group for 7 or 8 years.

Vocalization is used to communicate or anger calls also. They take 1-5 minutes daily for social grooming and take this as an important thing to do. This usually occurs between females and both the individuals do each other’s grooming. In females, shrieks are made to do agonistic encounters.

Male monkeys are the some-how leader of the groups. Some proboscis monkey male tends to live alone. The higher vocalization and longer nose may attract the proboscis monkey female most. Males have a red penis with a black scrotum. Fur color varies as yellow, grey reddish. These monkeys travels in groups. One group contains 9 to 19 individuals and they play within their group. These are not so aggressive like many other species of monkeys. Although minor aggression is seen but does not count the injuries or death of any individual.

Groups come together in the evening to sleep at night. Vocalization is used to communicate and as well as to threaten the predator. However, it is also a sign of excitement and agitation. Predators include crocodiles, leopards, eagles, monitor lizards, and pythons.

The nose of the proboscis is very big and hung over the face. This species is especially known for its large nose. This monkey female is attracted to the proboscis monkey male who has a larger nose among all others. It is symbolized as a sexual selection. Proboscis monkey is also called a long nose monkey.

The species of these monkeys prefers eating fruits, seeds, and mangroves. These are folivores and frugivores. But also eat some caterpillars and larvae. They prefer unripe fruits and young leaves over ripened fruits and mature leaves. Their stomach is specially designed to digest all types of food they eat.

Chambers in the stomach makes it efficient and special. A large stomach makes the belly protrude and is called a potbelly and monkey having such kind of belly termed as potbellied.

These monkeys have webbed toes and are able to swim. With the help of webbed toes, they can swim to a longer distance for a longer period. They travel from branch to branch and swim along. Swimming ranges up to 20 meters. It is noticed that proboscis monkeys are active at the time of the evening and stay energetic till night. All traveling and other activities are done at this time. They sleep near rivers and daily activities mainly include travelling.

The endemic proboscis monkey is the island of Borneo and present on these three nations such as Brunei, Indonesia, and Malaysia as they divide the island. Mostly proboscis monkeys found on riversides and coastal areas. Lowland habitats are avoided because of the tides.

The proboscis monkey is termed as an endangered species by the IUCN red list of threatened species. These are now scattered and inconsistently distributed all over its habitat and world.

1. Why does a proboscis monkey have a big nose?

They have a big nose as a symbol of attractiveness and appeal to a proboscis monkey female. However, bigger the nose, more females are going to like that male monkey. Scientists say that this bigger nose helps to create more vocal sounds that help to call, impress female monkeys, and to intimidate the rivals.

They show very less aggression and seem to give no harm to group mates and humans.

3. Where is the proboscis monkey found?

They are found on riversides and swamp places. Swamp forests and islands costing Malaysia, Indonesia.

4. How many proboscis monkeys are left in the world?

As they are termed as endangered species, only 50% are left in the past 30-40 years. This happened due to logging oil palm plantation and loss of natural habitat.

In this article, a proboscis monkey is discussed with detailed talking about its habitat, nature, diet, and behaviors, and the most remarkable feature is the long nose and its purpose. They are tagged as endangered species.