The Mandrills are considered the largest colorful Old World monkeys and are found in Gabon, Equatorial Guinea, Congo, and the rainforests of equatorial Africa. Mandrillus sphinx is the scientific name of these animal species. The tails of males are longer than those of females. When these monkeys are excited, their colors become very bright. They have blue and purple-colored thick ridges along their noses. 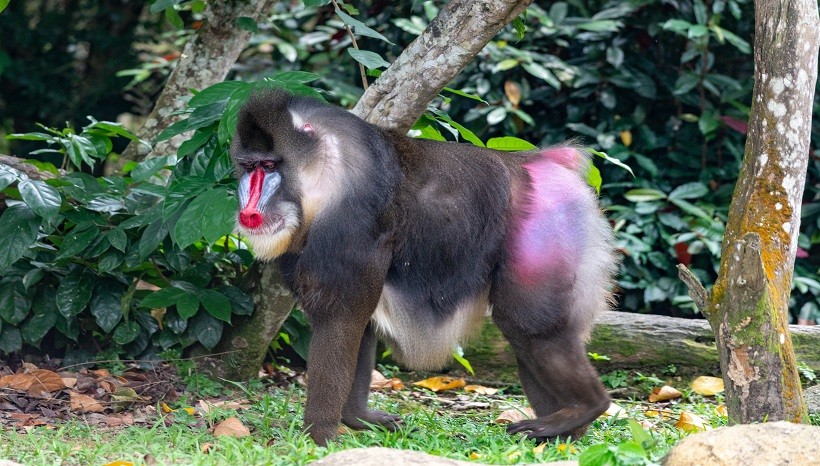 Furthermore, the west African monkey related to mandrill is drill; both of these show resemblance to baboons but are now categorized in a separate genus. Some of the interesting information and facts about these monkeys are as described here.

These animal species belong to the family Cercopithecidae. The males are of larger sizes with a length of 30 to 37 inches compared to females whose length is about 22 to 26 inches.  They usually weigh between 42 to 82 lbs in the case of males, while the females weigh between 22 to 33 lbs. Furthermore, the mandrill monkey coloration is very impressive and attracts people a lot. These monkeys have a golden-colored beard and red-colored lips. Their long arms help them travel long distances, thus also helping them find food on the ground.

These two animal species are closely related to each other in such a way that they both are shy monkeys. The major difference between them includes that the drills are not as colorful as the mandrills are. Instead of this, the drills’ males have genitals of lilac and red color, which are also very impressive as mandrills’ coloration appearance.

Most of the people want to know about “what is mandrill?”, so these monkeys have black colored hands and white-colored bellies. Their anus and genital areas are of multiple rainbow-like colors. They live in groups named hordes, thus containing 200 individuals of their own species.

Their cheeks contain pouches for the storage of extra food or snacks. In addition to this, these monkeys in the San Diego Zoo mostly eat fruits, greens, veggies, and low-starch biscuits. Most of these species have an average lifespan of thirty years, but the wild ones can only live for twenty years.

Their hairless faces are blue and red-colored. Furthermore, the extremely large-sized canine teeth for self-defense purposes are also present in these shy monkeys. They also have red-colored nostrils and white-colored tufts. The males have large canines of 2.5 inches as compared to females whose canines are of 0.4 inches.

As these monkeys have strong and sharp teeth with extremely large canines, they can cause great harm, if provoked. The mandrill facts have shown that they attack humans on getting threatened by them and sometimes become the cause of their death. That’s the reason these animal species are considered to be kept in the most dangerous animals’ category.

If we talk about mandrill vs baboon, all of the mandrills are of the largest sizes, but the baboons have different sizes depending on the species. The baboons are classified based on their different colors, such as yellow, silver, brown, and olive-green. In addition to this, the mandrills have blue and red-colored muzzles compared to baboons whose muzzles are dog-like. The baboons can live up to almost 45 years in captivity.

These monkeys are being sold in many countries, including Africa, for bushmeat purposes. This bushmeat provides a greater amount of protein and has also become a great threat to these animal species. Furthermore, many of the people buy these monkeys because of their attractive and colorful appearance and use them in exhibitions as well. There are also those people who want to keep them as their pets, but it is a wrong choice due to their aggressive and killing behavior.

The mandrill monkey fun facts are very interesting. For example, when they become angry, they slap on the ground with greater force. A character named Rafiki present in Disney’s movie, i.e. “The Lion King” is also this colorful animal species. Instead of all this, they can be easily identified by their unique fingerprints. The binocular vision is provided to them due to their forward- pointing eyes.

Like all other species present on the earth, these animals also require a proper diet for their survival. They are omnivorous and eat insects, small bugs, frogs, lizards, figs, fruits, tree barks, worms, seeds, fungi, roots, and low-starch food as well. The male ones come on the grounds in search of food while the females remain in the mid level trees; hence find their food there. In addition to this, they sometimes eat antelopes and also consume eggs.

These animal species have a gestation period of 179 to 182 days and breed every two years. They have a polygynous mating system and mate between the seasons of June to October. The females give birth to one or sometimes two babies in case of captivity. The mandrill monkey baby with pink-colored face reaches the maturity age after almost four to seven years. In addition to this, these babies stay near their mothers until the birth of the next offspring.

These are terrestrial, diurnal, and colorful mammals. The skull of these monkeys includes cranium and jaws. These animal species with red and blue colored skin patches on their faces are of great concern. Furthermore, the mandrill skull for sale is also available, and people buy these skulls to keep them in the museums, thus they are used in different historical exhibitions.

The mandrills have extremely large canine teeth, which they use for their self-defense. They also use them to bite or kill someone. Researches have shown that these large-sized monkeys are very intelligent and can eat humans as well, thus killing them.

These are not so aggressive but are shy mammals. They spend most of their time in groups whose leaders are dominant males. Although they are not so offensive, the mandrill monkey attack is very hazardous. Research has shown that these animal species start slapping fiercely on the ground when they become angry but show a very friendly behavior when they are in a good mood.

Sometimes people get confused even after reading the exciting information and facts about these animal species and start raising some questions. So, the answers to some of those raised questions are as mentioned below:

Although these mammals are very shy and reclusive, they sometimes become offensive as well and prove to be very dangerous. For example, if they are provoked, they can cause great harm and kill a person using their long, healthy, and sharp canine teeth.

No, these monkeys are not so aggressive but are extremely shy and friendly animals. They used to climb and sleep on trees as well with the help of their long arms. But they sometimes show signs of offense and start slapping on the ground fiercely.

As these animal species feed on fruits, frogs, lizards, small mammals, seeds, roots, worms, bark, figs, insects, and low starch-containing food; they can eat humans as well. That’s the reason they are not known as a good choice to be kept as pets. But sometimes due to habitat loss, their death occurs at an early age.

4. What is the most dangerous monkey?

There are present many of the dangerous monkeys throughout the whole world, including chimpanzees, Chacma baboons, Olive baboons, Hamadryas baboons, Western Gorilla, Eastern Gorilla, but the mandrills are the largest and most dangerous ones of them.

6. Why do females have colorful faces?

The colorful appearance of females has a vital role to perform. The faces and buttocks of these females become pink-colored when they are in heat, thus giving signals to males that they are now sexually able to get conceived. After the gestation period of 179 to 182 days, they give birth to the little ones.

As we have discussed many of the interesting facts and information about these monkeys, there are many threats to them as well. For example, the African people use these animal species for bushmeat purposes, and the chances of bushmeat hunting have been increased. In addition to this, many of the other people are using these monkeys for exhibition purposes, and their skulls are also being sold to be kept in different museums.

Because of the overuses of these mandrill species, they have been kept in the list of endangered species. The present amount of these beautiful creatures on earth is almost 3000 and is decreasing day by day. Furthermore, these are not considered good to be kept as pets or in homes because they are considered the most dangerous animals.